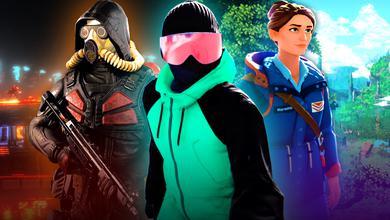 It’s all over. After months of speculation and dreaming up what could be, another E3 has come and gone. This was the one weekend every year when the video game industry descends onto Los Angeles (even if it’s virtually), celebrating the medium and taking in the latest project all the big names have to offer.

Publishers like Ubisoft, Square Enix, and Microsoft all made their presence known, unveiling what they have been working on and teasing what gamers can get excited about in the months and years to come.

From the biggest studios in the world to small three-person teams making their dream become a reality, everyone seemingly had something to show off (aside from PlayStation, of course).

While the big names have dominated the conversation with titles like Bethesda’s Starfield and Eidos-Montreal’s Guardians of the Galaxy, there were plenty of games just as exciting that deserve their moment in the limelight as well.

In that light, here are The Direct’s top five games shown off at E3 that you may have missed.

Watching the Xbox E3 Showcase, it would make sense to have missed Replaced. There was a lot going on with Halo Infinite, Forza Horizon 5, and Redfall. But for some, Replaced was the star of the show.

In Replaced, gamers traverse Phoenix City, in a neon-lathened 1980s alternate reality, taking control of R.E.A.C.H, an AI that has somehow found itself bound to a human body.

From the short snippets of gameplay shown, the minute-to-minute action of Replaced will be mostly platforming-based with bits of combat to break things up.

A few years ago, Microsoft unveiled The Last Night, a project that looked mighty similar to what Replaced is now offering. After that, The Last Night seemingly has gone dark. Worry not though, as this new game looks like it is going to nicely fill that retro cyberpunk void that sits in many gamers’ hearts.

Replaced is expected to launch in 2022 on both Xbox Series X/S and the PC.

Players partake in visceral combat as they make their way up a river on a series of platforms, and that is where the twist comes in.

Instead of the pathways being set by some level designer or made through procedural generation, players can actually the stone tetromino walkways around themselves. This acts as an added layer on top of the already stressful combat scenarios.

This game should prove to be a hit with a huge cross-section of gamers, looking to be both a competent rogue-like and a challenging puzzle game.

Loot River doesn't have a release date as of the time of writing.

Get ready to hit the slopes. Shown off during Xbox’s presser, Shredders looks to be a powder lover's dream.

While extreme sports titles like this year’s Riders Republic are moving back towards the arcade styling of the early 2000s, Shredders is going all-in on snowboard simulation.

The game's co-developers I-Illusions and Let It Roll have said they are taking inspiration from games like Skate and the Amped titles from Xbox consoles of yore. It looks like they are crafting a title that is less about quadruple-triple-cork-720’s and more the experience of actually carving down the mountain.

From the trailer, it seems as though gamers will be able to team up with friends, set up some lines, and simply play solo if they desire. It looks like an incredible amount of fun and is something sorely missing right now in the gaming landscape.

Shredders hits Xbox Game Pass this December 2021, so grab some friends and a handy cam to get shredding.

Sometimes after conquering the virtual world, stacking up kill streaks, or grinding for that exotic in Destiny, all a gamer wants is something warm and cozy. Well, Lake looks to be exactly that.

This mail-delivering adventure centers on Merideth Weiss, a big city gal who takes a break from the hustle and bustle and decides to deliver mail in her small hometown. And that’s the essence of the adventure!

Coming from Whitethorn Games, Lake is marketing itself as a relaxing jaunt of cruising around a small open-world, conversing with townsfolk, and playing mailman. Sure, not the most demanding of experiences, but sometimes that's what is needed.

It's definitely the biggest budget game on this list, but S.T.A.L.K.E.R. 2: Heart of Chernobyl certainly has fallen by the wayside when it comes to the conversation surrounding Xbox’s digital showcase.

The Eastern European-based shooter debuted with an impressive gameplay trailer. Fans of the first game will be quite pleased to see that the bone-chilling horror, survival-centric gameplay, and excellent story are all present in this long-awaited sequel.

Yes, what S.T.A.L.K.E.R. 2 seems to be providing feels familiar in a post-Metro series world. But it looks to be bringing all those familiar elements and wrapping it in one of the best-looking packages on the market.

In layman's terms, S.T.A.L.K.E.R. looks absolutely beautiful. It is the kind of gaming showpiece every new console generation needs. It’s hard to tell if Heart of Chernobyl will do anything particularly special or innovative for the shooter genre, but no matter what it is going to look spectacularly good doing it.

For some, SacriFire was the highlight of E3. This ode to classic RPGs was given the spotlight at the PC Gaming Show, and from the short glimpse that was shown, it looks to be something that could be truly special.

Sporting the tilt-shifted pixel art style the likes of Octopath Traveller, SacriFire wants to be a reinvention of pixelated role-playing games.

While not a ton is known about the game, developers Pixelated Milk said on their Kickstarter page, they want to combine the greatest hits of the past with the best of today. They aim to mix the beautiful pixel art of titles like Chrono Trigger and Vagrant Story, with the contemporary quality of life improvements and storytelling techniques of modern gaming.

And that is that! E3 2021 is over and so many spectacular games, both big and small, have just started their journeys in the public eye. That is what makes this annual showcase so special; it’s a space where the biggest of big and the smallest of small can share a stage and celebrate the medium.

Whether it is navigating a pixelated cyberpunk dreamscape, conquering the alien world of Pandora, or becoming a Guardian of the Galaxy, this E3 truly had something for everyone.

Gamers can be happy knowing that they are going to have plenty to play wherever or however they so choose.