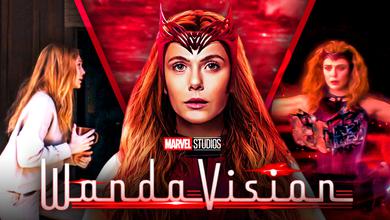 Even though Marvel's third Disney+ series Loki is within days of its release, fans are still learning more about WandaVision — the studio's first series to debut on the mouse house's streaming service earlier this year.

WandaVision focused on Elizabeth Olsen's Wanda Maximoff and how her character coped with her past grief and trauma through sitcoms.

While definitely an unusual concept, the series proved to be a massive hit. But in true Marvel fashion, one story always lays the groundwork for another.

By the series finale, Wanda Maximoff conquered her grief, herself, and Agatha Harkness while officially earning her comic accurate title: the Scarlet Witch.

And according to the show's creators, the final scene of the series closed one chapter while leading into another.

"We wanted more time to have elapsed, and that she would be somewhere isolated, somewhere where she felt protected, and on her own. Because we were trying, ultimately, to accomplish two goals."

While WandaVision's post-credit scene brought some closure to the series, it also left fans scratching their heads while also implying that there's more to come for Wanda in Marvel's Phase Four.

In the scene, Wanda is shown at an unknown location in an isolated cabin having tea.

But then, the camera moves past her to reveal her astral self seemingly pouring over the Darkhold — the same book seen in Agatha's basement earlier on in the series.

In regard to Shaeffer's two goals for the scene, her first was to establish that Wanda had "reached some semblance of acceptance."

"One, that she had reached some semblance of acceptance, and that she was able to be by herself comfortably; that there could be a measure of peace, and she could sit and have tea and reflect and not want to jump out of her skin and not, you know, be crying and self-medicating in any way, with her power or otherwise."

In WandaVision, Wanda is somewhat unaware of her actions and her abilities aren't always in her control.

And while she conquers this during the finale, the scene communicates the fact that Wanda's newfound control is here to stay.

Schaeffer went on to say that the second goal of the scene involved Wanda "wanting to know more about herself."

"And then the second goal was that what she’s learned through the course of the Westview experience, and specifically what she has learned from Agatha, would send her on this journey of wanting to know more about herself, and the Darkhold became the mechanism for that."

WANDA'S "STRANGE" ROLE IN THE FUTURE OF THE MCU

While WandaVision has concluded, Wanda's story has only begun.

The goals Schaeffer discussed are actually proof of that in that they reinforced Wanda's growth from the series while also laying the foundation for her next story.

And as most Marvel fans are aware, Wanda Maximoff is set to be a key player in Doctor Strange in the Multiverse of Madness.

In fact, fans recently learned that Doctor Strange was originally set to appear in WandaVision connecting these two characters, and perhaps the multiverse, ahead of Strange's sequel's 2022 release.

Perhaps that post-credits scene will hold even more meaning come 2022?

It's also worth noting that much like Wanda, Jac Shaeffer's story has only just begun as the writer recently signed a three-year contract with Marvel Studios and 20th Television.

Just what projects she will tackle next remain to be seen, but it's clear that both Shaeffer and Wanda will have plenty to do in the future of the MCU.