WandaVision Director Addresses If Agents of SHIELD's Darkhold Is Canon

Back before Disney+ was even an idea in an executive's head, there was a different era of Marvel Television.  First launched by Agents of SHIELD in 2012, and then rekindled by the premiere of Daredevil on Netflix in 2015.

All of these shows premiered under the mantra of "It's All Connected", and with the promise that they were in fact in the same universe as everything fans were witnessing in the larger MCU. Needless to say, it was a promise that went mostly unfilled, at least past vague mentions of the incident in New York, alongside other minimal hints to the heroes the MCU films.

If any show connected to the wider MCU the most, it was certainly Agents of SHIELD .  They got to go one step further than just only vague references and name-drops. They actually got to be involved with the off-screen set-ups of things that played out in the movies.  The biggest of which was easily that of their part in getting the helicarrier over to Sokovia at the end of Avengers: Age of Ultron .

Fans had it engrained in them that the adventures of Agent Coulson and co. were all canon. So color them surprised when they watched the WandaVision finale, and none other than The Darkhold showed up to play a big role . Yet, nothing about it lined up with Agents of SHIELD. So what do the creatives on WandaVision have to say about it? 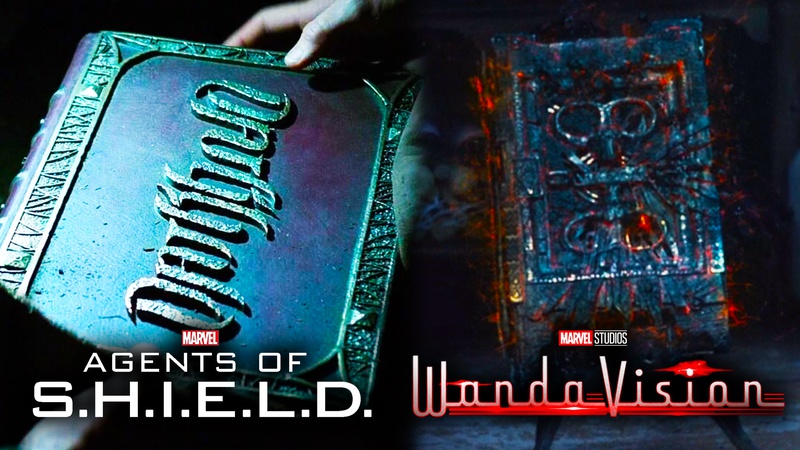 In an interview with WandaVision director Matt Shakman, ScreenRant inquired about just what it was that fans were seeing around Wanda as she was studying the Darkhold in that final post-credits scene.

" I wouldn't want to say too much. I can't say too much, except that obviously she's studying up and learning a lot from the Darkhold. And we'll see where that goes."

Then the topic of Agents of SHIELD came around, as the Darkhold showed its pages over on the popular ABC show supposedly set within the same timeline as the rest of the MCU.  When asked if it was the same exact book or an entirely different one, Shakman said that he "would imagine it's the same book:"

"Yes, we designed it anew. We didn't look at the other Darkholds that had been designed. It is part of the Marvel Universe though, so I would imagine it's the same book. I don't know exactly how it was used in those other shows, because I wasn't a regular viewer, but the Darkhold has a comics origin. Its mythology will continue to be developed."

In a separate interview by ScreenRant, this time with the showrunner Jac Schaeffer, the same topic of The Darkhold also came up--as did the question of its connection to that of the one in Agents of SHIELD . Schaeffer offered a conflicting answer to Shakman's response about the book:

"I've been getting that question, and I don't have a hard and fast answer.  We were not looking at that book. This was the Darkhold for this story."

The canonicity of Agents of SHIELD , alongside all the other Marvel Television shows ( Defenders, Inhumans, Runaways, etc.), has long been a debate amongst fans. Living off the promises of Jeff Loeb, they fell into the belief that what they were watching played a role in the wider universe and that their events held firm in the MCU canon. This was something that was kept alive because Kevin Feige never publicly went against it, alongside nothing in the shows or films ever contradicting each other.

That is until now (if the convoluted mess that was the last two seasons of Agents of SHIELD doesn't count). The truth is, the whole Marvel Television affair was always a one-sided relationship. Feige never paid any mind to what was going on over there and was never involved either. That's why it was such a big deal that when the Disney+ shows were announced, they made it very clear that not only was Kevin Feige just as involved in them as he was in the movies but that the events of their series would matter alongside the films--and even crossover between the two.

It's a hard pill to swallow for most.  In fact, many fans are willing to die on that hill. The old Marvel Television era was not for nothing though, and Feige didn't ignore all of it.  In fact, his love for Charlie Cox as Daredevil was made public, which likely plays a role in why the man without fear himself is rumored to reprise his role in Spider-Man: No Way Home . Daredevil isn't the only one rumored to make his return , so while all that came before may seem meaningless now, give it time.  Marvel Studios always likes to surprise--I imagine even more so now that the multiverse is in their arsenal of creative tools.