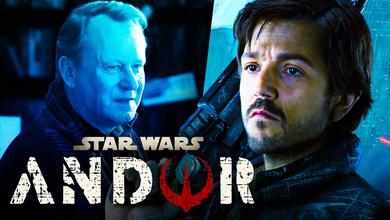 Swedish actor Stellen Skarsgård has had a number of fan-favorite roles, including Bootstrap Bill in Disney's Pirates of the Caribbean franchise and Dr. Erik Selvig in the Marvel Cinematic Universe. Recently, he was featured in the popular HBO miniseries, Chernobyl.

What some fans might not be aware of just yet is that Skarsgård is set to play a role in Disney+ and Lucasfilm's new Rogue One spinoff series Andor. Next to nothing is known about his role and character in the Star Wars streaming series. Perhaps he's playing a Rebel Alliance General or a high ranking Imperial Officer.

The actor was expectedly mum on the details...

Interviewing with The Daily Beast, Stellan Skarsgård had this to say on the production of Andor and the part he's playing:

"As you know, they’ll shoot me if I say anything! I can’t even get a proper script. It’s printed on red paper so I can’t make any copies of it, it’s ridiculous!... But when I saw Rogue One, it had much more atmosphere and seemed a little more mature—and that was Tony Gilroy, who’s the showrunner on this one. So, hopefully this one will be a little more than little plastic people falling over."

When asked if he took the Star Wars part to please his kids, Skarsgård admitted that line of thought did play a part in his accepting the role:

"I do think like that sometimes! I’ll go and do a children’s movie for that reason. But also, I’m not the most mature person myself, so who doesn’t want to go and fly a spaceship?"

He also seemed tickled at the prospect of his character being turned into a Star Wars toy which he could then give to his children:

Given Hasbro's penchant for making every Star Wars character under the twin suns into figures, Skarsgård might just have that dream realized.

But what's more intriguing, is that he touches upon Andor showrunner Tony Gilroy's involvement with the series. Gilroy is largely thought of as salvaging Rogue One: A Star Wars Story and was responsible for directing duties when the film underwent extensive reshoots. Gilroy changed a lot of Rogue One's tone which is the part that's exciting to Stellan Skarsgård.

Of course, it's understandable that an actor would want some deeper and more maturely-minded material to dig into.

Andor, which of course focuses on and stars Diego Luna's Rebel freedom fighter, Captain Cassian Andor is set to drop on Disney+ in 2022.