Star Wars: Galaxy's Edge is an immersive Star Wars-themed land found at the Disneyland Park in Anaheim, California and at Walt Disney World's Hollywood Studios in Orlando, Florida. These ( mostly ) identical lands are set in Black Spire Outpost on the planet of Batuu, a locale soon to be represented in an upcoming book and in the Star Wars: Tales of Galaxy's Edge virtual reality game .

Disney guests who visit Star Wars: Galaxy's Edge enjoy visiting a cantina, interacting with Chewbacca and stormtroopers, browsing at shops and stalls, sampling intergalactic cuisine, and experiencing two rides: "Millennium Falcon: Smuggler's Run" and "Star Wars: Rise of the Resistance". The former offers guests the experience of either piloting the Millennium Falcon or performing other tasks mid-flight. The latter drops guests into their own Star Wars adventure through the use of multiple ride systems and 360-degree sets, simulating being caught in a tractor beam, literally walking through.

Guests fortunate enough to enjoy the "Rise of the Resistance" experience the feeling of being recruited by the Resistance at the secret base, the sensation of space flight and being caught in a tractor beam, walking through a massive star destroyer hangar bar, escaping capture with Kylo Ren in pursuit, facing life-size AT-ATs, and then falling back to the surface of Batuu in an escape pod.

Since Galaxy's Edge is becoming a more prominent location in the Star Wars Universe, here are a galaxy's worth of Easter Eggs and unique, exclusive merchandise that one can find on a visit to Walt Disney World's version of the land... 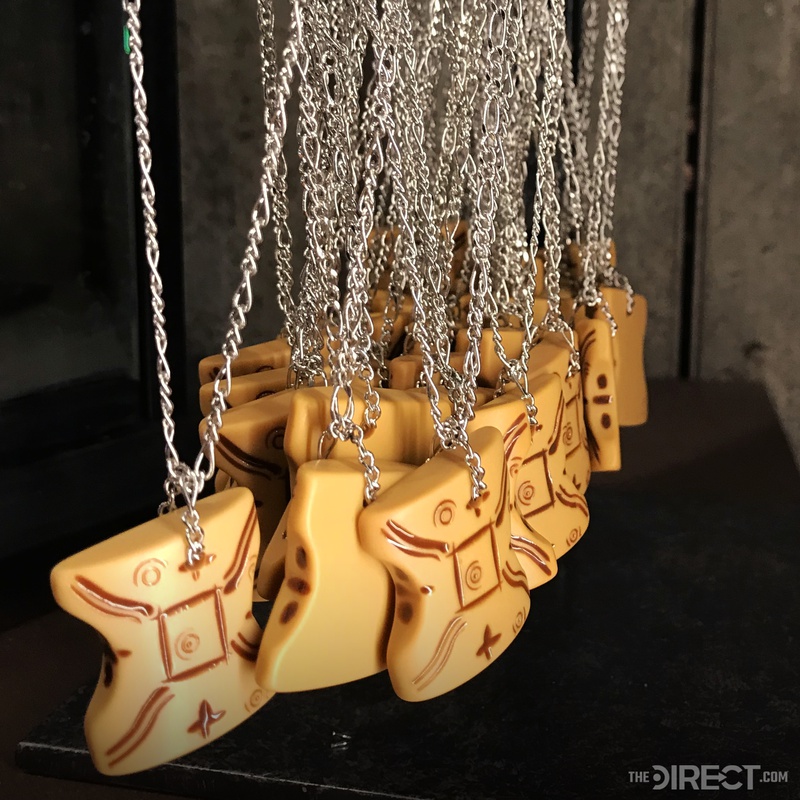 Galaxy's Edge offers so much more than souvenir t-shirts. At the land, Star Wars fans have the opportunity to purchase apparel and accessories worn by characters in the Star Wars Universe. But don't think these are just Halloween costumes. Since Galaxy's Edge is intended to be in-universe, these fashion statements are incredibly detailed and packaged and displayed as simply gowns or jackets or necklaces. Only fans will be able to identify who they belong to and their significance. 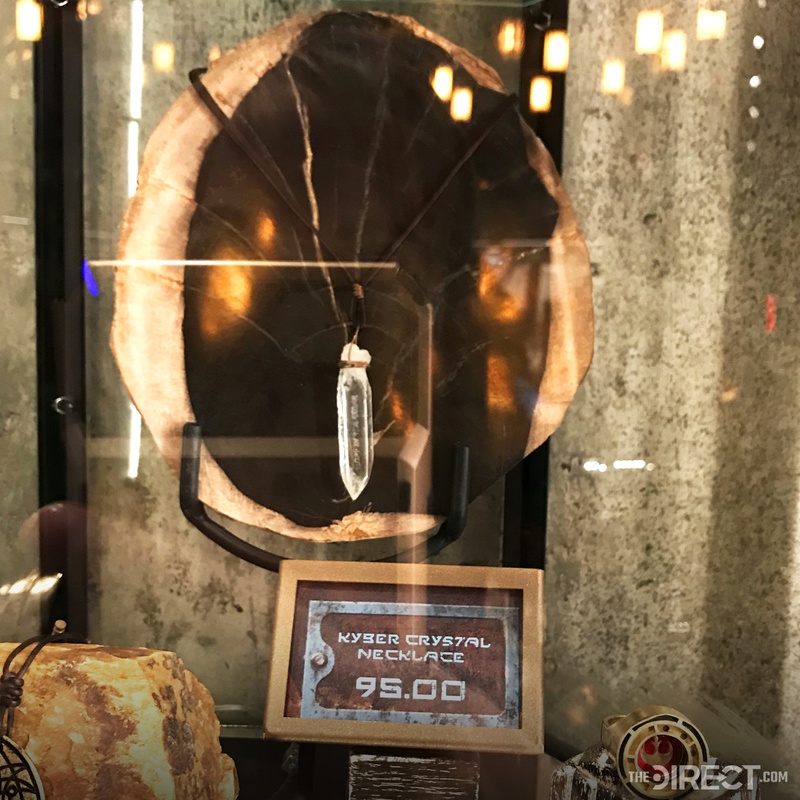 For example, the japor snippet on a chain is what Anakin gave Padme in The Phantom Menace , and the kyber crystal necklace was what Jyn Erso wore in Rogue One . There's also a Haysian ore medallion, just like Rose Tico's in The Last Jedi , and a gold necklace resembling Qi'ra's from Solo: A Star Wars Story . Additionally, a vast selection of rings and necklaces worn by Princess Leia in both A New Hope and suring the Sequel Trilogy is available at the park.

9. Original Trilogy Mobiles and Models in the Toydarian Toymaker 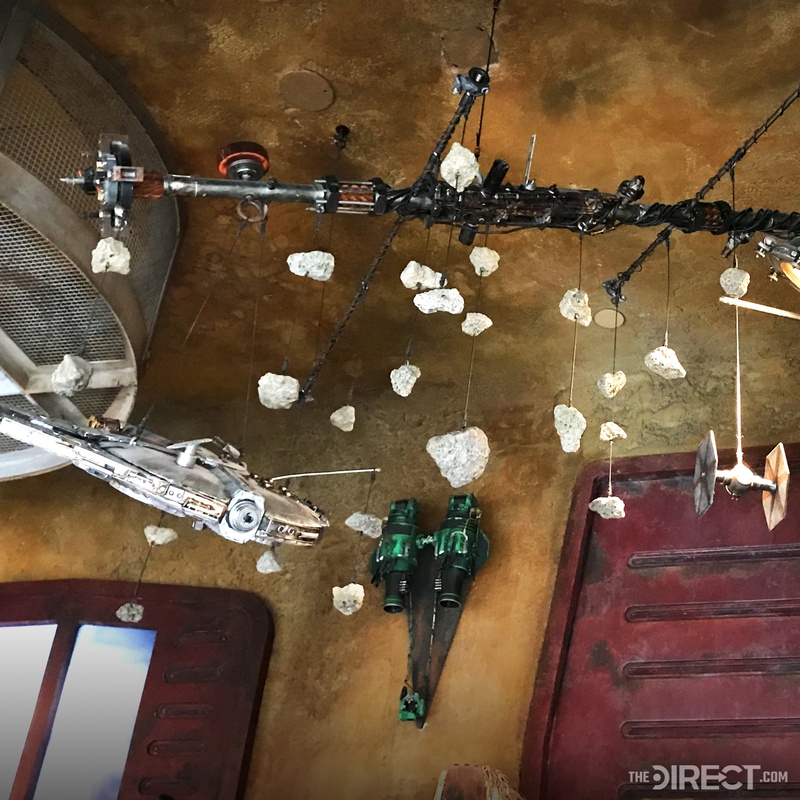 One of the best shops in all of Galaxy's Edge is the Toydarian Toymaker owned and operated by Zabaka the Toydarian. FYI : A Toydarian is an alien species like Watto from The Phantom Menace . Don't even bother with the Jedi mind tricks. They don't work on them. Only money.

Anyway, since the Black Spire Outpost is supposed to be a real location within the Star Wars Universe, you won't find any action figures or LEGO sets here. Instead, you will find toys that look handmade such as a handstiched porg or Yoda rag doll, wooden sandcrawlers filled with carved, mini-Jawas, Ewok drums, a pack of Sabaac cards, and even chance cubes! 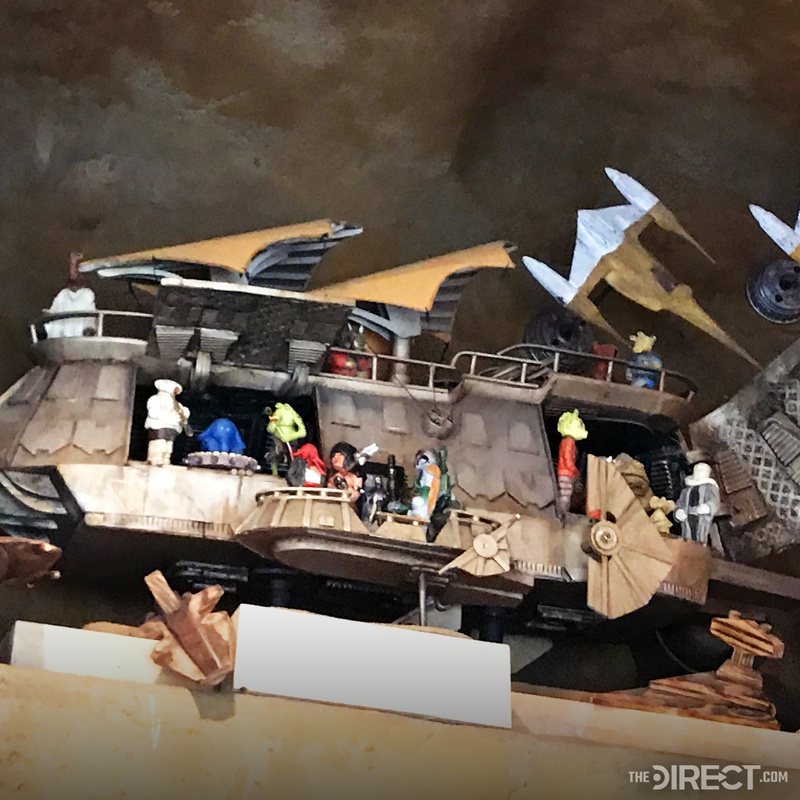 While this "authentic" merchandise is incredible, one of the best Easter Eggs and tributes to the Original Trilogy can be found here. Hanging above from the ceiling are handcrafted mobiles and marionettes, seemingly made of whatever materials Zabaka could find, retelling scenes from the Original Trilogy. Observant shoppers will see Obi-Wan and Vader's classic lightsaber duel from A New Hope , the Millennium Falcon in the astroid field from The Empire Strikes Back , and Jabba's sail barge from Return of the Jedi . 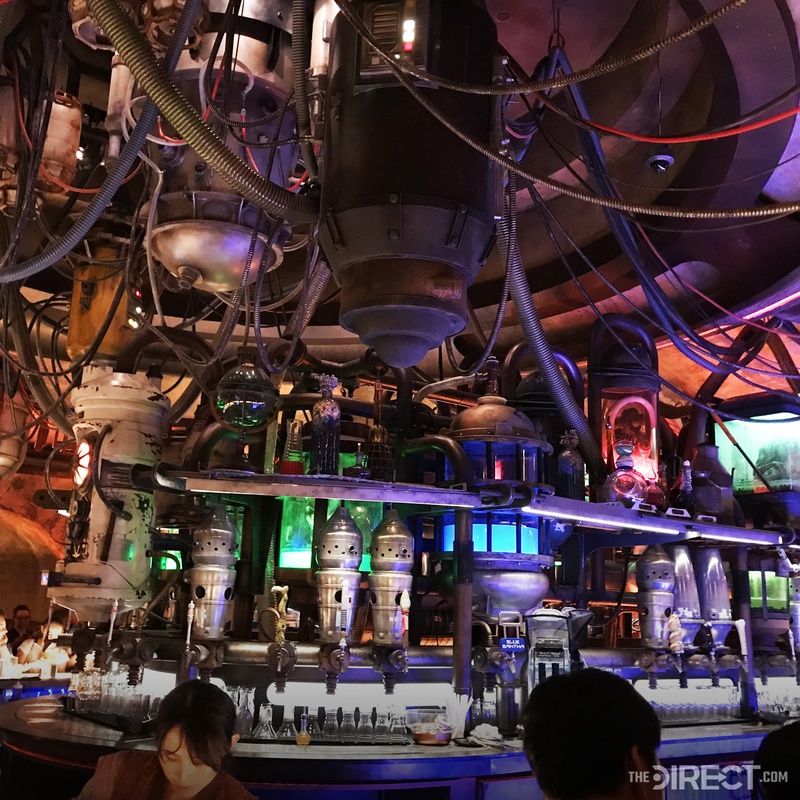 One of the most popular locations in Galaxy's Edge is Oga's Cantina. While it's not the Mos Eisley Cantina from A New Hope , it definitely has the same vibe and similar booths complete with blaster holes and burn marks from some aggressive negotiations. Plus, you can order beverages with names like the Fuzzy Tauntaun, Jabba Juice, and the Blue Bantha which is, you know it, blue milk.

The bar itself is highly detailed and a treasure trove of tributes and references, but one of the best has to be the taps made from IG series droid heads! Not only is this a nod to IG-88 from The Empire Strikes Back and IG-11 from The Mandalorian , it's also a nod to the same taps seen in Mos Eisley Cantina in A New Hope . 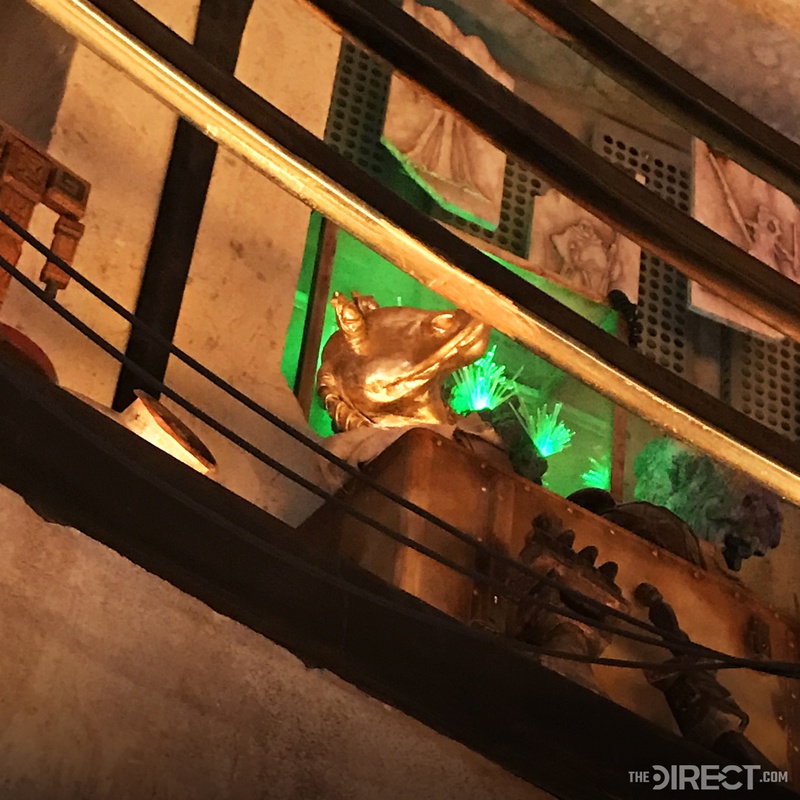 Every small town needs an antique store, and Batuu's Black Spire Outpost is no different. Dok Ondar's Den of Antiquities is run by an audio-animatronic Ithorian who boasts an impressive collection ranging from iconic, replica lightsabers to Tauntuan and Nexu taxidermy to holocrons and kyber crystals. The second level of the shop and its selection can only be viewed from the ground floor but is literally crammed with statues, helmets, blaster displays, crates of artifacts, and more.

On this second level, eagle-eyed guests can spot a tribute to one of the more unforgettable characters from the Prequel Trilogy - Jar Jar Binks. Every antique store needs something a little scary, right? Peeking out of an open crate is a golden statue of Jar Jar Binks himself, but you need to be at just the right angle in the shop to spot him.

6. Han and Leia's Passageway in the Millennium Falcon 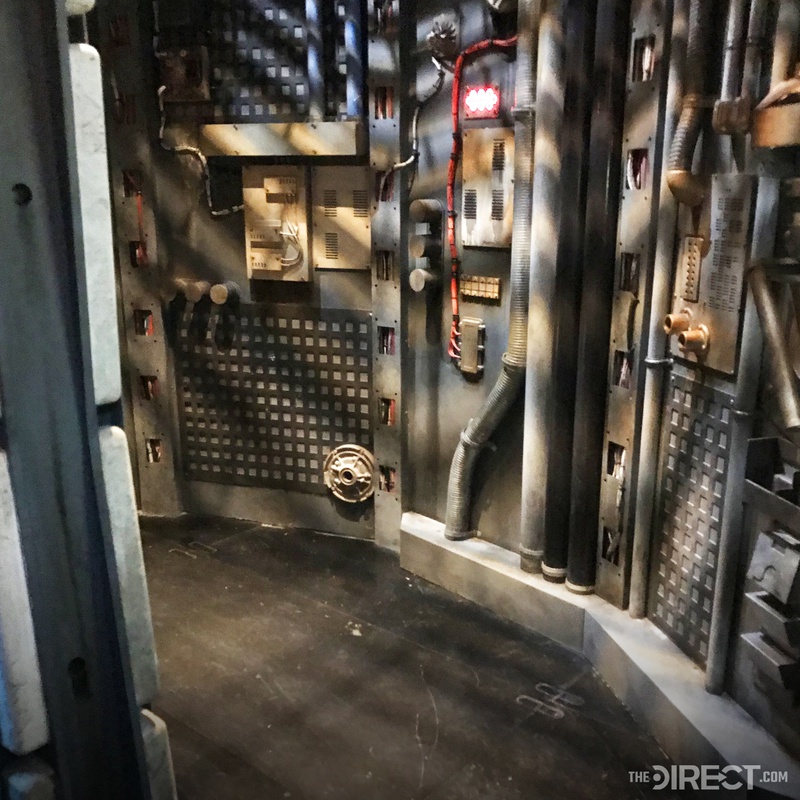 Part of the experience of the land's Millennium Falcon: Smuggler's Run ride is the line! Before guests are ushered into the cockpit of the fastest hunk of junk in the galaxy, they are held in a waiting room that's a replica of the ship's lounge complete with a Dejarik and/or holochess board. You may also notice the occasional porg nest and even the medical bay where Luke was treated for the loss of his hand in the third act of The Empire Strikes Back .

But the best, and definitely more subtle, Easter Egg in the Millennium Falcon is a small passageway; and if you've watched The Empire Strikes Back religiously (as you should), you will notice the passageway is replica of the spot where Han and Leia had their first kiss in the film.

5. Tributes to the Trash Compactor 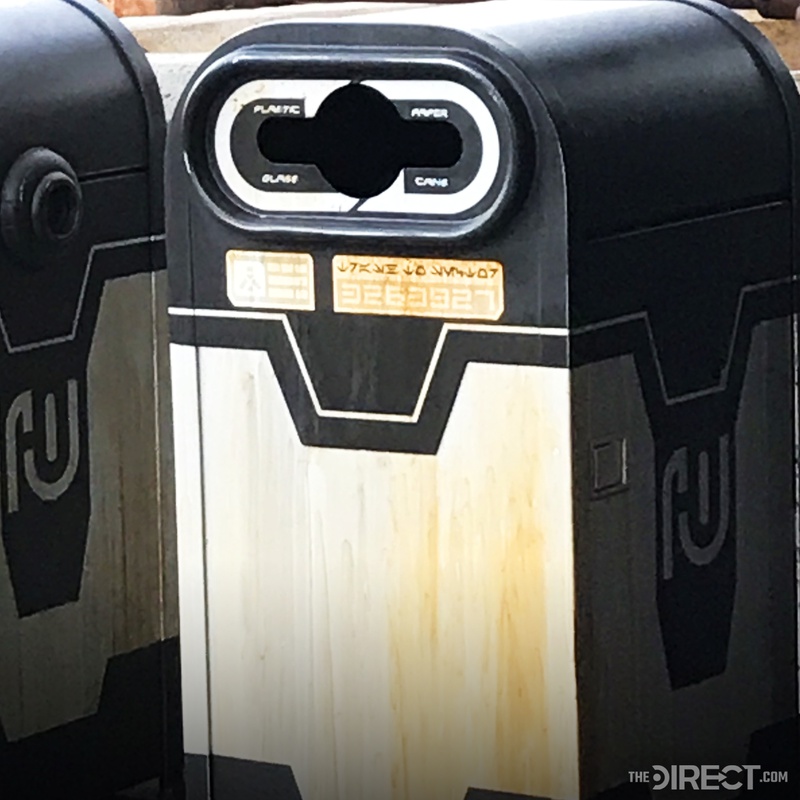 Star Wars fans are no doubt familiar with the classic trash compactor scene from A New Hope; and Galaxy's Edge pays homage to that scene in really the only way it can. In the film, Luke, Han, Leia, and Chewbacca were trapped in garbage masher 3263827. Therefore, every trash can in Galaxy's Edge bears the numbers 3263827! 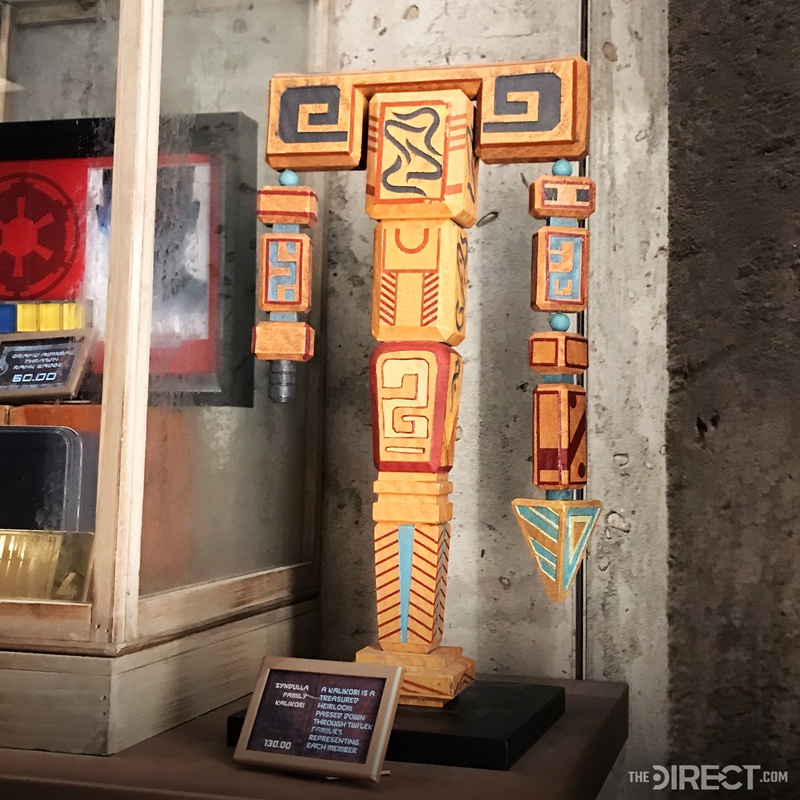 Star Wars Rebels is often overlooked in comparison to the Star Wars feature films and doesn't have much merchandise to choose from. Fortunately, that's not the case at Galaxy's Edge. In fact, this theme park land is littered with both references and merchandise related to the series, including Hera Syndulla's kalikori.

Fans of Star Wars Rebels know this item is a Twi'lek family heirloom where members add a new piece of artwork with each generation, and Hera's kalikori was featured prominently in several Rebels episodes. This is why it's so cool that fans can buy Hera's kalikori complete with the piece she added after Kanan's death. Guests who take the time to study the second floor of Dok Ondar's Den of Antiquities may also spot her original kalikori hidden among his other collectibles. 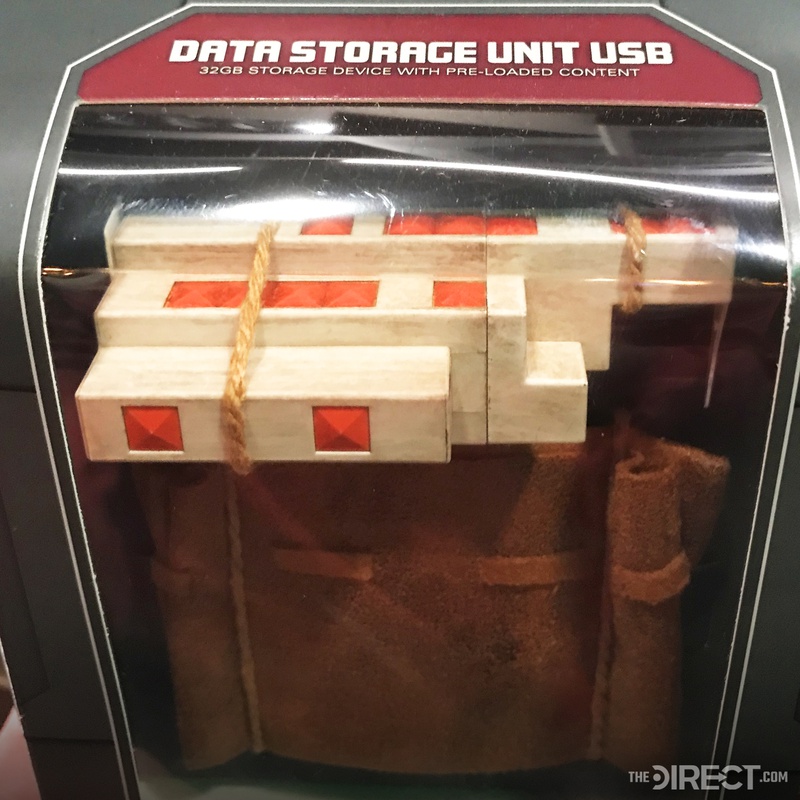 The Force Awakens opened with Lor San Tekka giving a small data storage unit to Poe Dameron. Of course, this device contained part of a map to Luke Skywalker. Well, at Galaxy's Edge, you too can purchase a small data storage unit just like what you saw in the film, but this one functions as a USB! Interestingly enough, it also contains pre-loaded content as an extra bonus. 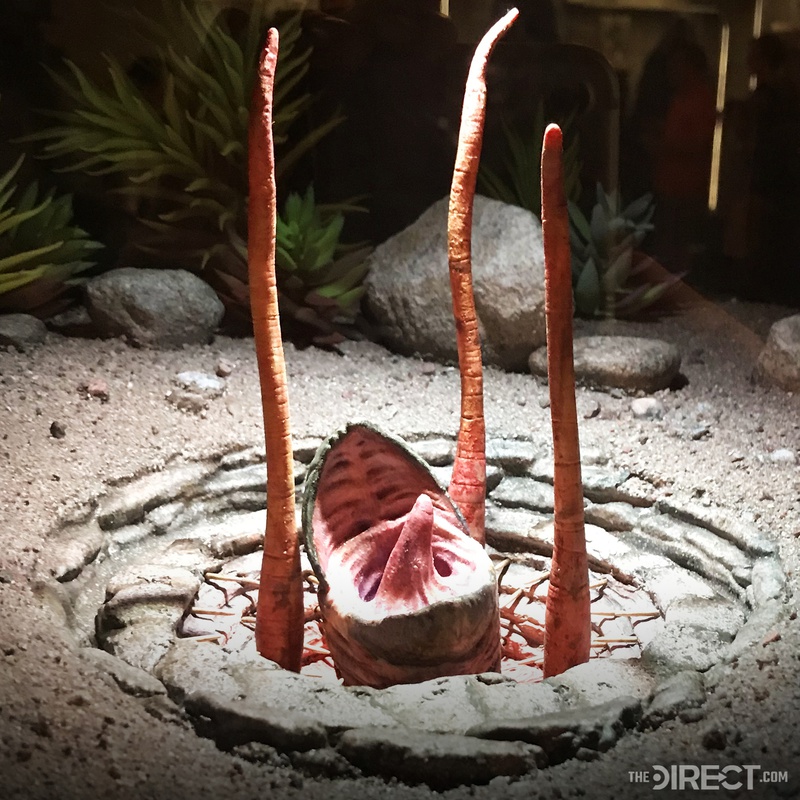 In the first act of Return of the Jedi , Jabba the Hunt sentenced Luke, Han, and Chewbacca to be fed to a sarlaac where they would be slowly digested over a thousand years. At Galaxy's Edge, you can encounter a living, baby sarlaac named Simpi enclosed in a glass case display in one of the shops!  While not pictured here, the bottom of the display reveals the body of the sarlaac and its stomach digesting its latest feed.

1. The Mandalorian's Helmet and Rifle in Dok Ondar's Den of Antiquities 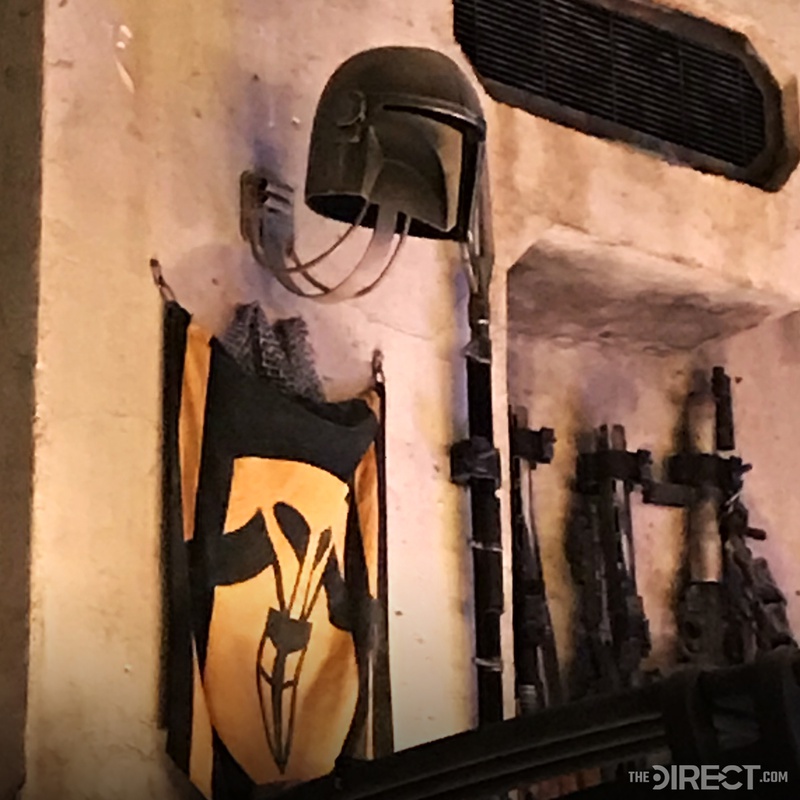 Mounted up on the wall inside of Dok Ondar's Den of Antiquities is a now-famous helmet next to an equally famous rifle. If that wasn't obvious enough, the famous Mandalorian symbol of the skull of Mythosaur can be seen overhead.