Lou Ferrigno Has a Warning For She-Hulk Disney+ Show 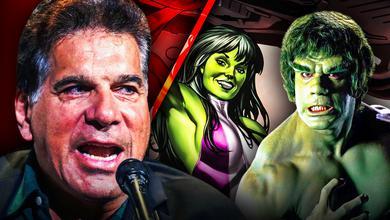 Beginning with WandaVision and now halfway through Loki, Marvel Studios has proven its ability to "smash" records and expectations on Disney+. And even though the studio has released three series already this year, Kevin Feige and Co. show no signs of slowing down soon.

In addition to Ms. Marvel, Hawkeye, and Moon Knight for Disney+, Marvel also has a She-Hulk series in the works for a 2022 release.

She-Hulk stars Tatiana Maslany as Jennifer Walters, Mark Ruffalo as Bruce Banner, Tim Roth as the Abomination, and possibly Hulk's son Skaar. But, of course, She-Hulk isn't the first Hulk-inspired series television series, and that show's original mean and green hero has some advice to share.

ORIGINAL HULK ADVISES AGAINST "TOO MUCH CGI"

In an interview with TooFab, Lou Ferrigno who played the Hulk in The Incredible Hulk television series warned against "too much CGI" in the upcoming Disney+ to ensure both authenticity and believability.

"I think it's a good idea, but I think we have to get retrained from seeing too much special effects because the more authentic, organic the character can be, the more believable. So we have to see what happens because it may work for 'Star Wars' -- it may work for different films, but you know, when you have too much CGI, it gets confusing."

Of course, back then, CGI wasn't a possibility and the series was forced to rely on practical effects, a lot of green makeup, and Ferrigno's physicality to portray the iconic character.

THE HULK CREW GETS ITS DUE

Unlike the other OG MCU heroes — Thor, Iron Man, and Captain America — 2008's The Incredible Hulk starring Edward Norton (and not Mark Ruffalo) was the first and only MCU film where Bruce Banner filled a leading role.

And even though Mark Ruffalo's Smart Hulk isn't the main star of She-Hulk, his inclusion and the focus on another Hulk-esque figure helps to right that wrong and continue the character's legacy.

Lou Ferrigno's advice regarding too much CGI is a sentiment that many film fans have been expressing for years when it comes to blockbuster spectaculars, especially considering how practical effects have a longer shelf life than many CGI-heavy movies from a decade ago.

Granted, the MCU has largely been the exception considering their strong storytelling and developed characters; but still, of all Marvel heroes where the studio could be tempted to rely too much on CGI, it would be the Hulk.

And that's a problem since, in order for that character to work, the audience needs to recognize their humanity and connect with them, even if when they're angry.

It's no surprise that Ferrigno knows what he's talking about considering his tenure as the Hulk; and due to the tight, half-hour legal comedy angle the studio has teased for the She-Hulk series, maybe they too understand that it's best to go real and personal as opposed to big and epic.