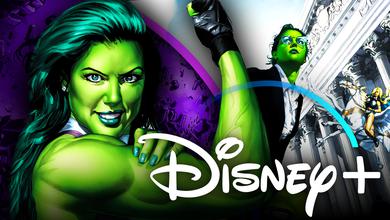 Jennifer Walter, AKA She-Hulk, is a unique character. In the comics, her life was saved thanks to a blood transfusion from none other than her cousin Bruce Banner, also known by his more commonly used name: The Hulk. It goes without saying, that the character got a little more than just a second chance at life.

Thanks to Bruce, Jennifer became a Hulk of her own. Though, unlike her cousin, not only did she retain more control over the whole process, but she also was able to be fully coherent and intelligent when Hulked out. Sort of like what fans have seen with Professor Hulk. Now add the fact that not only is she a superhero, but she's also a full-time lawyer.

She-Hulk is an interesting character, to say the least, and she is finally getting her shot at live-action at some point next year with She-Hulk on Disney+. Fans finally have their first look at the production, which only just started up. However, it may not be what one would expect.

MARVEL TAKES IT OUTSIDE

Thanks to a video posted by Atlanta Filming, the first glimpse of She-Hulk's production can be seen. The video, which can be seen below, showcases several gray cars on the back of a Marvel Film Productions, LLC. branded truck.

SHE-HULK IN THE OPEN

Now clearly, there isn't all too much to be gained from this very minimal peek at what the show is currently up to. At the very least, it indicates that they likely plan on shooting some exterior stuff sometime in the near future. That, or the cars are simply on their way to be placed in a set on the studio lot where they are filming.

Hopefully, though, this means that the first real look at She-Hulk may not be that far out. While clearly, fans won't see a giant green Hulk onset, there may hopefully be a glimpse of Tatiana Maslany for the first time in character. Or better yet, maybe she'll be in a full motion-capture suit.

It will be interesting to see how Marvel will be able to pull off the character with the constraints of a television budget. While yes, Marvel's shows have a far higher budget than nearly any other television product out there, both WandaVision and Falcon and the Winter Soldier have showcased that they still have limits.

Fans will just have to have faith that Feige knows what he's doing—and that shouldn't be a hard thing to do at this point.