The finale of the MCU Madness Tournament put the two biggest movies in the Marvel Cinematic Universe against each other. And there could not have been a more fitting ending. Endgame and Infinity War are at or near the very top of virtually every MCU fan's list. Less than 2% of the vote was the difference as The Direct audience made their decision on which masterpiece they favor.

Thanos believes his destiny is to bring perfect balance to the universe. The simplicity of 50/50 seems to be the most logical solution to the greater issue in his mind, and just like in the MCU he almost had his way in this matchup. Avengers: Endgame is an ode to MCU fans everywhere as the epic culmination of a universe featuring moments we have dreamed about, a journey through our beloved history, and the conclusion to the arcs of some of our favorite characters. Some call this unapologetic fan service, but what makes this movie so amazing is how it combines that fan service with supreme storytelling. It is hard to imagine someone coming away from this movie feeling less than satisfied.

And while Avengers: Infinity War does not get our title of MCU Madness Champion, losing by less than 2% to the biggest movie of all time designates this movie as the official 1B rank of the MCU. With the way this movie ends, fans are left reeling as they try to process the fate of their heroes. After 2.5 hours of twist and turns and amazing moments, the Russo Bros seemingly pull the rug out from under the audience in a perfect execution of the cliff hanger. In a match like this between two heavyweights, it is common that whoever gets the last hit will come out on top. Endgame and Infinity War gave the fans everything they had, but Endgame delivers the final blow to put it up on top

WHAT WE LEARNED FROM MCU MADNESS 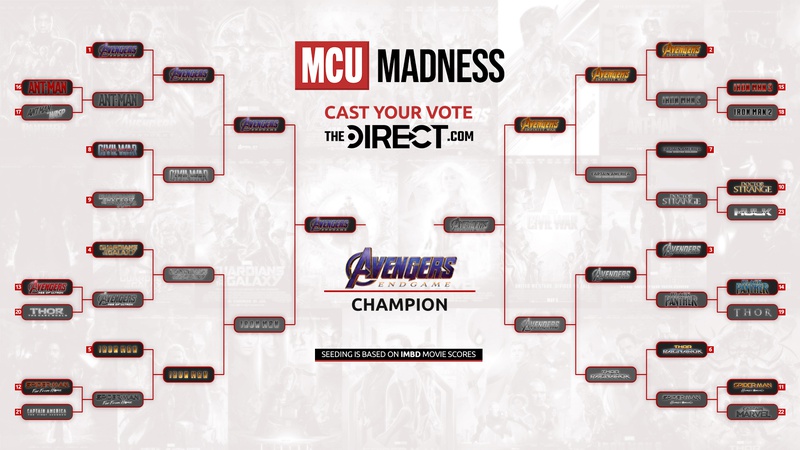 CLICK HERE FOR A HIGH-RESOLUTION VERSION OF THE BRACKET

We got to take a look at every movie in the MCU. The pros, the cons, how they compare to each other. From it all, we learned one main thing... kings stay kings. We had nine films receive a first-round bye in this tournament. And omitting the matchup between the eight and nine seeds, every single one of those movies advanced to the elite eight. This just shows that even though every MCU movie is a joy to watch in its own way, that top tier of films is on another level. We only saw ONE upset in the entire tournament in the 4 v 5 matchups. As we continue to build on this universe, it will be interesting to see if any movie past the Infinity Saga will reach that upper tier.

Thank you all so much for following along this tournament. We at The Direct strive to do everything we can to keep you entertained during these tough times. Please let us know how your bracket compares to the MCU Madness tournament. Also, make sure to sign up and become a member of The Direct community. We would love to hear your feedback on the types of content you are looking for.