In the Championship Round of the MCU Madness Tournament , we have a matchup that everyone has been waiting on since Round One. Avengers: Infinity War and Avengers: Endgame are often looked at as a 2-part mega-movie. So for this matchup, we are going to take a look into how Marvel Studios was able to go back-to-back with the two biggest comic book movies ever made. MCU fans everywhere will never forget how they felt after the ends of each of these movies. Each film ends in a snap that leaves you either stunned & silent or satisfied & cheering. Either way, these are the 1a and 1b of the Infinity Saga. Which will you choose? VOTE DOWN BELOW! 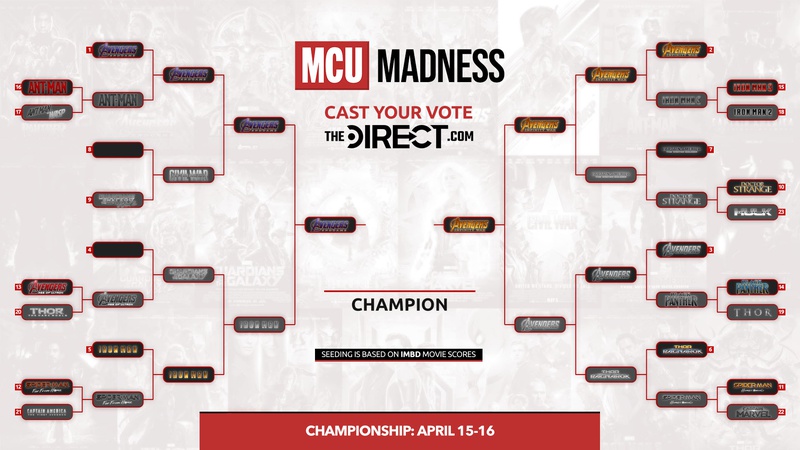 Heading into 2018, the MCU had built a robust and exciting roster of heroes and villains that span from red-headed super spies to goateed Masters of the Mystique Arts - with one of them even being a talking raccoon. Each character has a unique and interesting history that we genuinely care about. It seemed impossible to bring all of these characters together for one common goal. Not only did Marvel Studios accomplish this feat, but they did so while still exploring individual character arcs and relations and leaving us with possibly the biggest cliffhanger in the history of cinema.

Not only does Infinity War give us all of our heroes at once, we also get the much-awaited deep dive into the MCU’s big bad: Thanos. I truly feel this is Thanos’s movie. It is hard to believe that we are able to get such a great look into such a great villain and have him cement his legacy in the MCU after just one film. When you consider that feat, along with all of the moving parts, action scenes, quiptastic dialogue, and a truly shocking ending, this movie gave us more than we possibly could have asked for.

You Should Have Gone For The Head

Now let’s talk a little bit more about that ending. I used to believe that you could not physically hear silence... until I saw this movie in theaters on opening night. The Snap brings a shock that is so impactful that you don’t even hear music for the next few minutes. Eleven years of worldbuilding and anticipation boiled down into half of the universe vanishing into existence and leaving our heroes left defeated and hopeless. For a movie that has over a decade of build-up and nearly a century of source material to shock us as many times as Infinity War does is something that once seemed impossible.

Infinity War could be considered the great epic of the MCU. The ultimate climax to years of buildup. And their execution is widely considered perfect. If that was the end of the line for the Infinity Saga, fans would have been okay with that, because that is how well that story was told. But this is comic books we are dealing with... Our heroes have to win! So the MCU attempted to follow up its great epic just one short year later with something even bigger and better. But unlike in the past, fans everywhere were certain that Kevin Fiege, the Russo Bros and Marvel Studios were going to pull it off. Spoiler alert… they did.

After the shock of Infinity War , we all knew going into Endgame that this was going to be the end for some of our staple heroes in the MCU. With an idea of the endgame in mind, fans had some personal thought of how they wanted this movie to end. How were the Avengers going to rescue Tony? What is Carol Danvers's role in all of this? What happened to Thanos after the snap and how could they possibly kill him? The anticipation for all of those answers lasted a solid 20 minutes into this movie. After we see the words "5 YEARS LATER" it felt like the rules went out the window and that an unprecedented conclusion to a 22-film saga was finally upon us.

It sometimes feels that Marvel Studios made the first 21 movies for the fans and that they made Avengers: Endgame for themselves. That idea is a huge reason why these movies are so beloved as the people making them are just as big of fans as we are. This film is an ode to the Infinity Saga as we walk through its past, explore the core characters that built it all, and fill out the majority of the top ten list of greatest moments in the MCU. When you work with time travel, we are asked to suspend belief more than we usually like to do. But what we get in Endgame once again proves why Marvel Studios is the best at what they do: Getting their fans to buy in.

The expectations of both of these movies were greater than any movie that ever came before. And if you just took the last hour of this movie alone, those expectations would have been met. Tony Stark fulfills his destiny and finally saves the universe from Thanos. All of our favorite new heroes return from being dusted away to set up the MCU for the foreseeable future. And Steve Rogers experiences what he has never been able to obtain in the MCU… a happy ending. You laughed. You cried. You cheered and you stood in awe throughout this film. And the penultimate chapter of the Infinity Saga finishes the greatest story told on the big screen. Endgame left you smiling from ear to ear knowing it was all worth it.

Part Of The Journey Is The End

So ultimately it comes down to how you felt at the end of each of these movies. Infinity War gave you twist and turns that kept you on the edge of your seat and left you stunned by what you just saw. Endgame gave you everything you have ever wanted to see in a Marvel movie and a feeling of completeness that left most fans standing in applause. Which movie are you choosing as your champion of the Infinity Saga!

VOTE IN THE TWITTER-EXCLUSIVE POLL NOW

The #MCU Madness tournament - a bracket-based gauntlet for fans to decide the champion movie of the Marvel Cinematic Universe - has been narrowed down to the final two films! Vote in the Championship match below and see the progress of the tournament here: https://t.co/bwmYvayZXW