Bruce Banner, aka Hulk, has had a complicated MCU history, partly due to the distribution rights for his movies lying at Universal, hence why the Avenger hasn't led a solo outing since 2008's The Incredible Hulk. The MCU's Hulk started out being played by Edward Norton before Mark Ruffalo took over for The Avengers.

Norton may have only gotten one go-around as Bruce Banner, but many still remember his portrayal fondly. With She-Hulk having just revisited the Hulk, the recast even caught a nod from Ruffalo as he, referring back to his 2008 encounter with Abomination, said he is "a completely different person now, literally."

Regarding the reasoning behind Edward Norton being recast for The Avengers, Marvel Studios President Kevin Feige issued a statement at the time revealing that the decision was made to find "an actor who embodies the creativity and collaborative spirit of [their] other talented cast members:"

"Our decision is definitely not one based on monetary factors. but instead rooted in the need for an actor who embodies the creativity and collaborative spirit of our other talented cast members. The Avengers demands players who thrive working as part of an ensemble, as evidenced by Robert, Chris H, Chris E, Sam, Scarlett, and all of our talented casts."

Now, as She-Hulk concludes with the most meta storytelling in MCU history, The Direct has learned Norton was considered to become a part of that. 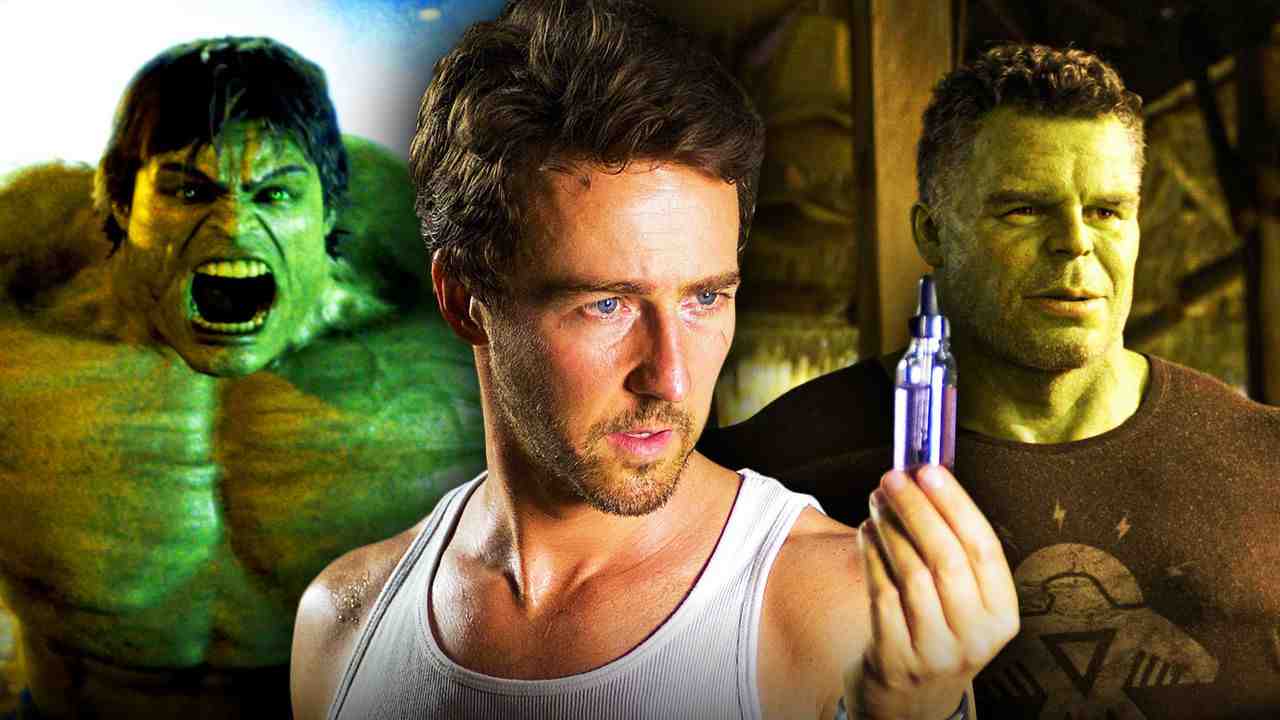 Discussing any ideas that were considered for Hulk's long-awaited reunion with Abomination, Coiro confirmed that she and Marvel Studios did "entertain the idea" of swapping out Mark Ruffalo for Norton for that scene, as when they last met Banner was played by a different actor:

“There was a lot of talk about the fact that the last time they were together a different actor was playing the Hulk. And Mark [Ruffalo] made quite a few jokes about that. And we did entertain the idea of swapping Mark out for Edward Norton. But that did not come to pass.”

The director also revealed the Intelligencia meeting at the lodge was filmed "at the very beginning of shooting" which, just as the episode chose to convey clearly, didn't make sense to anybody:

"And then the other thing that I think is kinda fascinating for people to know is that we filmed that finale sequence with everybody in the lodge at the very beginning of shooting. And all the actors were like, ‘What in the hell is going on?’ And I had to say, ‘It doesn’t make sense, but don’t worry. That’s the point.’ And that was really unique, from a director’s point of view, because you have to get people to trust you. But then you’re telling them, ’It doesn’t make sense. It’s not supposed to. Just come along for the ride.’”

Coiro clarified that the finale sequence shot at the beginning of production only included the chaotic moments in the lodge and not the fourth-wall-breaking KEVIN scenes at Marvel Studios:

“Not KEVIN the robot, but in the lodge where you have Mark Ruffalo, and Tim Roth, and Jon [Bass], and Tatiana [Maslany]. Like that scene, which is all about chaos and is all about introducing every character who’s come before and so we absolutely knew we were going to KEVIN. But it’s a very chaotic way to start.”

Hulk and Abomination had a short-lived reunion in She-Hulk as the two went head-to-head for just seconds over a simple misunderstanding.

However, that confrontation was cut short after She-Hulk broke the fourth wall to remove Hulk from the scene and restore Abomination to Emil Blonsky.

Will Edward Norton Ever Return to the MCU?

Clearly, Marvel Studios had bigger plans for Hulk and Abomination's reunion that would have poked plenty of fun at Mark Ruffalo having replaced Edward Norton. Abomination's Tim Roth even teased his time with the new Hulk actor and all the fun they had on set, suggesting more than their one scene together was planned:

“Yeah, I was like, 'You've changed.' (Laughs) It's kind of fun. We used to hang around and muck about between takes, and we had a nice time. I very much respect Mark as an actor, so even under those bizarre and wonderful circumstances, that one was a treasure.”

Based on Kevin Feige's original comments at the time of Norton's MCU recasting, the former Hulk actor may have not made himself easy to work with. The Incredible Hulk star was reportedly controlling on set and insisted on rewriting script elements himself, behavior that Marvel Studios clearly found frustrating.

So, even though the She-Hulk team may have had hilarious ideas for how Norton's cameo could play into the finale, Marvel Studios and Feige would likely have shut down the suggestion to avoid repeating those same problems. Not to mention, bringing back Norton after all this time could prove confusing for some viewers.

Even if Norton were to be offered an MCU role once again, whether that be as a Multiversal Hulk in Avengers: Secret Wars or perhaps another character altogether. The acclaimed actor may not be interested in reuniting with the studio, having previously been fired from the franchise after just one outing.

She-Hulk: Attorney at Law is streaming now on Disney+.