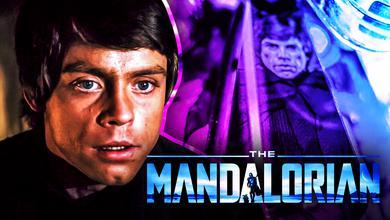 It's been nearly five months since Season 2 of The Mandalorian aired its final episode on Disney+, and fans are still reeling.

Mando and Grogu's latest adventure took viewers on a tour across the Star Wars galaxy. From the sands of Tatooine to the perpetually moist Trask, the journey was a cornucopia of Star Wars lore.

While the second season of the hit streaming series did up the ante when it came to familiar faces showing up in this new era, one cameo stood head and shoulders above the others. In the Season 2 finale, audiences were treated to seeing a post-Return of the Jedi Luke Skywalker rescue Mando and company, tearing through some Death Troopers in the process.

In the months since Luke's The Mandalorian appearance, marketing featuring the green-sabered Jedi has been scarce. However, fans do have a new look at young Skywalker in a rather unlikely place.

A new line of pinball machines was unveiled by Stern Pinball and StarWars.com centered around the blockbuster Disney+ series The Mandalorian. The Mando-themed arcade machines include a custom sculpted Razor Crest, a miniature Baby Yoda, and new art of Mark Hamill's Luke Skywalker.

The cabinets feature art that acts as a tribute to the original Stern Star Wars pinball machines, as seen below:

Luke can be seen on a bumper looking battle-ready and posing with his neon green saber.

The playfield has been intricately designed, playing on a classic western pinball motif.

In the game's backdrop art, characters from The Mandalorian can be seen, including Ahsoka, Boba Fett, Bo-Katan, and the hooded Skywalker.

The machine itself looks quite hefty and features a large screen, as many modern pinball cabinets do.

The Mandalorian pinball machines can be purchased directly from Stern and are available in Pro, Premium, and Limited Edition (LE) models.

A GAME FIT FOR A JEDI

This is exciting news for Star Wars fans that have both the money and space for a Mando pinball machine. Partnerships like these seem to be about as numerous as nerfs waiting to be herded in the galaxy far, far away. While many will not ever see the fruits of these labors, upon visiting any number of arcades it quickly becomes clear that anyone and everyone has a branded pinball and/or arcade cabinet.

Diehards can get excited about the Easter eggs and small tributes scattered across the playing surface. The largest of these tiny tidbits on this cabinet comes in the form of that painterly Luke Skywalker art. Fans only ever got a small glimpse of Mark Hamill's Luke as a master Jedi and didn't receive any official promo art after the finale, so any chance to see more is a welcome one.

Some will glean a sort of greater meaning from Luke's inclusion here, but the excitement should be tempered. Just because the black-robed Jedi appears here does not mean Disney has some sort of master plan for him. Taking a look at the art on this cabinet, it seems that if someone played any sort of part in Mando's journey so far, then they are surely included. It's a tribute to the series as a whole, not a peak of what is to come.

The awards push for Season 2 of The Mandalorian has just begun and can be streamed in full on Disney+.