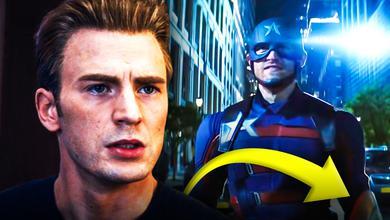 Almost every MCU fan knows the score by now.

An elder Steve Rogers handed his famous shield to Sam Wilson, aka The Falcon, in the closing moments of Avengers: Endgame, along with the mantle of Captain America. At the time, Sam promised to "do his best," but as seen in The Falcon and the Winter Soldier, he ultimately felt that the right thing to do was hand the shield over to the United States government for display in the Smithsonian.

Little did Sam know that the government would simply hand the shield over to its new, federally sanctioned Captain America: John Walker.

And, as it turns out, Walker's a little unhinged. In his drive to prove himself, he injected himself with the super-soldier serum, a decision that culminated in his bludgeoning an unarmed man to death with the shield.

So, naturally, Sam (and Bucky Barnes) want the shield back. However, as seen in the mid-season trailer for The Falcon and Winter Soldier, Walker's not giving it up without a fight.

A quick shot in the latest The Falcon and the Winter Soldier trailer shows John Walker striding toward the camera, shield in hand. However, there's something off about its design.

There seems to be added detailing on the star in the center, as well as thicker lines going around the circumference.

The shield as it has appeared in all other episodes of The Falcon and the Winter Soldier looks slightly different, as seen below:

BATTLE DAMAGE OR SOMETHING MORE IN NEW FOOTAGE?

The latest trailer for the show sets up a tense, physical battle with John Walker squaring off with Sam and Bucky who are presumably trying to reclaim the shield.

Now, Captain America's shield is made of vibranium, the uber-versatile metal found in Wakanda. Bucky's bionic arm is also constructed from vibranium. Perhaps in the scuffle, Barnes lands a solid hit on the shield with his metal arm causing it to crack, resulting in the altered appearance seen in the image above.

Or, and perhaps more likely, Sam and Buck succeed in taking back the shield, and the government issues Walker a new shield. Maybe this new shield isn't even made from vibranium.

After all, Wilson and Barnes can be seen in previous trailers at Sam's home in Louisiana training with the original shield which was previously held by Walker.

Whatever the case may be, fans are sure to get some answers in "Episode 5" of The Falcon and the Winter Soldier which hits Disney+ on Friday, April 16.