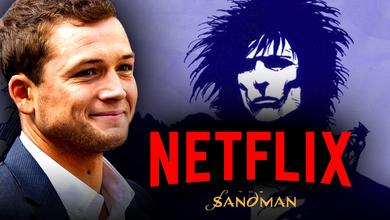 In summer of 2019, it was reported that Netflix had ordered a serialized story of The Sandman, bringing it out of its decade-long development purgatory. While progress on the series stalled for much of 2020, production officially began this past October.

Despite having over three months of filming behind them, attached actors to the project have been kept heavily under wraps.

Update: Per Neil Gaiman, Deadline misreported Taron Egerton's involvement in Netflix's The Sandman. Egerton recently voiced John Constantine in the audiobook adaptation of the Vertigo comic but has no role in Netflix's series, according to Gaiman.

Now even Deadline gets very confused by IMDB's inability to tell the Audible version of Sandman from the Netflix version.
https://t.co/ePlvR0bzwP

Coming from Deadline, the Rocketman actor is said to have been “attached to an adaptation of Neil Gaiman’s The Sandman.” There is no telling what role Egerton will fulfill, but it does confirm he, is in fact, linked to the Netflix show.

You can count on one hand the amount of things we know about Netflix's The Sandman, but Egerton's casting strongly legitimatizes the project. As a blossoming A-List talent, starring in blockbuster franchises like Kingsman and leading critically-acclaimed pictures like Rocketman, Egerton's involvement immediately boosts Sandman's stock.

As previously mentioned, The Sandman has successfully kept its cast hush hush for a number of months. The show was originally set to begin production last May, which means they are coming up on a full calendar year of keeping most details secret.

As for who Egerton could be playing, the most likely role seems to be Corinthian. Both Liam Hemsworth and Dacre Montgomery were previously under consideration for the aforementioned role, and looking at their similarities to the Kingsman star, it's probable that Egerton could be the one to take on the character. With Tom Sturridge already reportedly starring in the leading role as Dream, the next biggest part would likely come to Egerton, which in this case, would be Corinthian.

In Gaiman's comic, Corinthian is a nightmare created by Dream who is later destroyed by his Dr. Frankenstein for going rogue. If Egerton does end up playing the nightmare, it would be one of his first villainous roles.

The Sandman is currently in production in the United Kingdom, and is expected to stream on Netflix sometime in 2021.