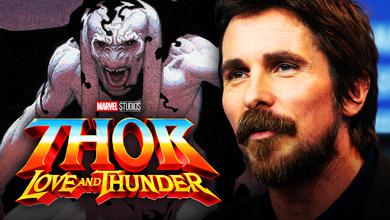 Back in March of this year, Tessa Thompson confirmed to Entertainment Tonight that Christian Bale would be playing the main antagonist in the upcoming Marvel Studios film Thor: Love and Thunder. The fourth Thor installment in the MCU was already loaded with Taika Waititi back to direct and Natalie Portman returning as Jane Foster to wield Mjolnir and take on the role of Mighty Thor. Chris Hemsworth is also set to return as the god of Thunder, joined by Tessa Thompson's Valkarie and Chris Pratt returning as Star Lord with The Guardians of the Galaxy.

It was unclear who Bale would be portraying, until now.

At the 2020 Disney Investor Meeting, Marvel Studios chief Kevin Feige officially announced that Christian Bale would be starring as Gorr the God Butcher in Thor: Love and Thunder, coming to theaters on May 6, 2022.

Academy Award-winning actor Christian Bale will join the cast of Thor: Love and Thunder as the villain Gorr the God Butcher. In theaters May 6, 2022. ⚡ pic.twitter.com/fWS4UuP2oM

Christian Bale will officially return to the comic book genre 10 years after he hung up the cape as Batman in The Dark Knight Rises. This time he will be a bald, white-eyed villain who is capable of fighting multiple Thor-like beings at the same time. If Marvel Studios is planning on showing a comic-accurate Gorr, then this may be a motion-capture performance by Bale, or just a lot of makeup.

The first symbiote, All-Black attaches itself to Gorr in the comics and this gives him the dark strength to go on a God-killing fiasco.  In the MCU timeline, it is possible that Thor and Gorr have already met before. In the comics, Gorr uses the blood of the Time Gods to travel through time and attempt to kill Thor's of different times. With rumors that Richard E. Grant will play an older version of Loki in the upcoming Loki Disney+ series, seeing an older Thor is conceivable.  One thing seems clear, with Jane Foster becoming Mighty Thor in this film, it will once again take more than one Thor to take down the God Butcher.