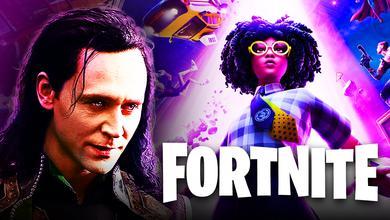 Ever since the first Thanos mode arrived to celebrate the release of Avengers: Infinity War in 2018, Fortnite has built a strong relationship with Marvel. Over recent years, the iconic Battle Royale title has released cosmetic skins for Black Widow, Iron Man, Thanos, and many more.

After the recent release of a Green Arrow skin from the DC universe, the July skin has been revealed, confirming Loki is on his way to Fortnite.

Following Epic Games' recent announcement of a Loki skin coming to the Fortnite Crew subscription service this July, the first look at the Marvel-themed cosmetic pack was revealed.

Epic Games' reveal was accompanied by a new cinematic trailer showing the God of Mischief boarding the Battle Bus.

A post on the official Epic Games blog also revealed that the Loki Laufeyson outfit will be accompanied by a Cape Back Bling, the Scepter Pickaxe, and the Chitauri Chariot Glider.

Additionally, the pack will be accompanied by the Loki's Welcoming Loading Screen which shows several of the game's skins kneeling before the God of Mischief.

Gamers can join the Fortnite Crew subscription service for $11.99 per month through the hit Battle Royale title's in-game store. Subscribers will gain access to the Loki-themed cosmetics at 8 pm ET on June 30 across all platforms.

Loki's gaming debut comes as the God of Mischief continues to star in his own Disney+ series. However, Fortnite has clearly opted to take inspiration from the Asgardian's most iconic royal look as opposed to his TVA uniform that he currently wears on his time-traveling adventures.

Just recently, the Mad Titan himself, Thanos, was released into Fortnite as a cosmetic skin, making it clear that the partnership between Epic Games and Marvel isn't slowing down anytime soon.