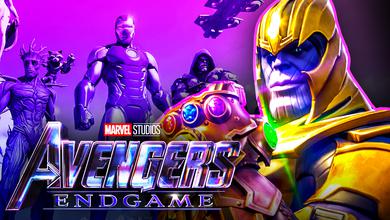 Four years after revolutionizing the battle royale game format, Fortnite remains as popular as ever.

Much of Fortnite's success can be attributed to its item shop, a virtual merchandise store that gives gamers the opportunity to buy both unique and familiar skins to equip their player with. Skins range from originals like Midas to pop culture icons like Superman.

Beyond the shop, Fortnite has evolved through its themed seasons and special events. Marvel got a full spotlight in season four's Nexus War as the comic giant took over the game with NPCs like Iron Man and Wolverine.

While Marvel heroes recently got their spotlight, the MCU's biggest villain is set to command center stage once again.

THE MAD TITAN RETURNS TO FORTNITE

Dread it, run from it, destiny arrives all the same.

Epic Games announced that Thanos will be making his return to Fortnite on June 26, 2021, when players can purchase him as a skin as well as a completed Infinity Gauntlet for back bling.

Ahead of his item shop release, Fortnite will run a special "Thanos Cup" event on June 21, 2021. The event will run 10 total battle royales across three hours with duos attempting to rack up as many points as possible. Participation requires players to have their Epic Accounts at a minimum of level 30 and 2FA enabled.

Thanos may be new to the item shop, but Fortnite is familiar territory for the Mad Titan.

The Avengers: Infinity War antagonist debuted in a special "Thanos: Infinity Gauntlet" game mode in 2018 where players attempted to take down the NPC Mad Titan for a chance to wield the all-powerful Infinity Gauntlet. Once equipped, the gauntlet gave players a massive health boost and did stronger damage than any traditional weapon.

Thanos's return to Fortnite will be completely different from 2018. This time, gamers will have the chance to be the character himself. Like all skins, Thanos will operate the same as the rest with no enhanced abilities or grander size.

Once Thanos arrives in the item shop, tenured Fornite players will have the chance to mix and match his skin with different umbrellas or back bling. This means those who purchased everything from the Nexus War season have the chance to equip Thanos with Captain America's shield, Wolverine's claws, or Hulk's fists.

The most similar concept to 2018 comes in the Thanos Cup. This three-hour tournament gives players the chance to win Thanos Watches if they rack up at least eight total points.

Fortnite's seventh season, Invasion, is currently active on both Xbox and PlayStation. The Thanos Cup is scheduled for Monday, June 21, 2021.