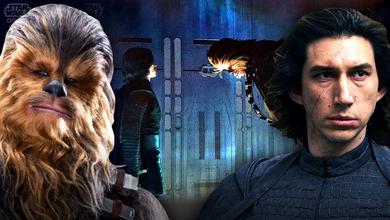 Ever since Rae Carson's Star Wars: The Rise of Skywalker novelization was released on March 17, fans have been surprised by the number of important storytelling details and plot points which were left out of the film. Through Carson's film adaptation, fans have learned Rey's father was a failed Palpatine clone, Finn is Force sensitive, and Rey and Ben's kiss was that of gratitude and not romance. While film novelizations are intended to provide supplemental information, The Rise of Skywalker's novelization seems to be only adding to fans' frustation and confusion over why important scenes were relegated to the book instead of the big screen.

According to CBR via ComicBookMovie, the Star Wars: The Rise of Skywalker novelization also includes a scene between Chewbacca and Kylo Ren which contributed to Kylo Ren's eventual redemption. This is surprising since Kylo Ren and Chewbacca had little to no interaction in the sequel trilogy despite Chewbacca's relationship with his parents and his presence in young Ben Solo's childhood years.

In this new scene, Kylo Ren is attempting to probe Chewbacca's mind for information about Rey and the Resistance following Chewbacca's capture on Pasana.

"He saw flashes of the Wookiee laughing with a much younger Han Solo than he himself remembers. Felt Chewbacca's joy when his best friend married the woman he'd come to love like a sister. Saw the Wookiee cuddling a human toddler, teaching an older boy to fly a speeder, target practice with a young man, their blasters set on stun against a haphazard dummy made of rocks."

The article goes on to explain the novelization details, explaining that by continuing to probe Chewbacca's mind, Kylo Ren realizes Chewbacca doesn't hate him for killing Han Solo. Instead, Chewbacca treasures his memories with the young Ben Solo and still considers him part of his family.

This scene proves Kylo Ren's redemption wasn't as sudden as it appeared in the film and that Ben Solo's entire family, including Chewbacca, played a part in bringing him back to the light. The lack of these critical, storytelling scenes in the film have also contributed to the theory that J.J. Abrams' vision for The Rise of Skywalker was changed by Disney and that a director's cut of the film exists.