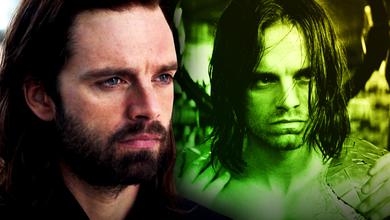 Bucky Barnes: War Hero, Cap's best friend, and for about 70 years, the fist of Hydra. After a fall from a train in 1945 in 2011's Captain America: The First Avenger, Barnes was captured by Hydra and brainwashed into becoming their most fearsome enforcer, The Winter Soldier.

Packed to the gills with weaponry and outfitted with a bionic left arm, the Winter Soldier was created to strike hard and then vanish. S.H.I.E.L.D. had the bare minimum of records on him. In short, he was a ghost story. That was until he encountered his best friend from childhood, Steve Rogers, AKA Captain America.

Cap was able to jog some of Bucky's old memories and start him on the path to recovery. That path was shortened significantly when he was brought to the technologically advanced nation of Wakanda at the end of Captain America: Civil War to remove decades worth of mental conditioning subjected to him by Hydra.

A new book, The Wakanda Files: A Technological Exploration of the Avengers and Beyond, which serves as an in-universe guide to many MCU characters and concepts, shed some light on Bucky's mental state in the present-day MCU timeline.

In the book, T'Challa's genius little sister Shuri notes in her log: "I know that some scientists can be mad," referring to the Hydra doctors that worked on Bucky, "but this an entirely other level of lunacy. It's such a fragile thing to play God with the human brain."

This, however, came at a great cost. Shuri elaborates:

"An EEG on Barnes revealed just how murky and extensive his brain damage was. Hydra's Winter Soldier program subjected Barnes to electroconvulsive therapy followed by suggestive keywords and phrases to activate a brain soup knot that could take years to unravel."

Shuri also notes that Bucky's brain was periodically "rebooted" like a "slow computer." And elsewhere in the book, she compares his limbic system, which deals with emotions and memory, to a "Christmas tree on psychotropic drugs" due to the man's handling by the evil organization.

Bucky certainly has had it rough in the MCU. He's lucky he that he seems to be in a somewhat stable condition as of Avengers: Endgame.

Could his mental state and conditioning come into play in the upcoming Marvel Studios Disney+ series The Falcon and the Winter Soldier? Given that Helmut Zemo is set to return in the highly anticipated streaming show, it's very possible.

Fans may recall that in Civil War, Zemo went to great lengths to obtain Bucky's activation phrases so he could force him to be complicit in villainous schemes. It's very possible that Zemo would try the same thing again in The Falcon and the Winter Soldier. In fact, in the Super Bowl spot for the show from February, 2020, we can see what looks to be a tense standoff between the two characters.

The Falcon and the Winter Soldier will hit Disney+ sometime in 2021.