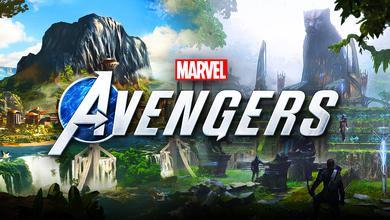 Even before the Avengers game was released, it faced a long and hard road. Reception to the game was unimpressive, and that was before anyone publicly had played even a second. So of course, it didn't help that when the game released, its launch became a brutal disaster.

While Cyberpunk 2077 came along to share some of that negative attention, Avengers all but faded into obscurity. With even the smaller player base the game still maintains, fans are still facing issues with both the game and its developers.

Square Enix hasn't given up though. One of the biggest additions to the game post-launch is fast approaching: War for Wakanda.

The developers have now finally posted their first blog post giving some fresh new information on everything Wakanda.

Since there is so much to cover, Crystal Dynamics made it clear that this blog post is the first of two parts.

When designing Wakanda, the team wanted to focus on the "Marvel DNA", which they describe as the foundation of everything they do. When designing new elements for the game, the team scours Marvel source material all the time, something that remains true for bringing Wakanda to life.

One of the first examples that the team cites of this is one of the new panther statues that players will see in the game.

Of course, with Wakanda comes the jungle. When designing this new playable space, they "aimed to make it lush, beautiful, and atmospheric", with "organic shapes and a maze-like density"—something the team believes will promote and encourage exploration.

That exploration is something the team seems very proud of, including features like "hidden entrances behind every waterfall", alongside "every nook and cranny of the jungle."

Admiration of the surroundings is something the team wanted the player to be constantly experiencing. Aditionally, the statue shown above won't be the only thing to see other than trees and vines.

Ancient Wakandan monuments and structures will be scattered throughout the Wakandan jungle biome, with the team noting that many of them are "safeguarded by contemporary Wakandan equipment." Exploring these will be worth it for players, as they will provide resources and collectibles of various kinds.

Inspiration was taken from many ancient civilizations, with the team noting that what makes Wakanda different is that not only does their culture go back millennia, but their technology has always been far superior to that of any other civilization on Earth.

Above is the Warrior's Gate, something that is part of the trials need for returning warriors to go through in order to re-enter Wakanda.

The team hoped that their architecture designs would show off the "craftsmanship and ingenuity of the Wakandans." Not only that, but also the nation's forward-thinking.

The blog included an image of Azzuri's Temple. This is a prime example of that forward-thinking element that helps builds the Wakandan culture.

They use the living, growing trees as structural elements throughout the generations to integrate into their temple constructions. This specific Temple is teased as having a "special significance in the story of War for Wakanda."

One of the most complained-about elements of the Avengers game is the obscene amount of recycled elements. The development team at Square Enix has taken note, and for War of Wakanda the team has not recycled any arts—so even all the gameplay objects and resources are brand-new.

Everything was crafted from scratch, creating a unique style for all of Wakanda, including both ancient and contemporary styles for the nation.

Wakanda Turrets will be featured in the game, with gamers running into both friendly and hostile versions of them throughout the expansion.

A contemporary structure used for wall running in Wakanda was shown off on the blog. This is something that will also be used by Black Panther, with the team confirming that wall running will be joining his skill set.

Resource crates will be utilized in the African nation's expansion, a far cry from the boring Shield chests.

An Ancient strongbox is also seen, which has a different design language than that of the contemporary designs that are also present in the game.

The ancient Wakandan technology seen in the game utilizes features like "puzzle mechanisms, transportation devices, and even mechanical defenses."

When it came to designing the ancient elements that the players would both run across and interact with, the team wanted them to give a glimpse of how life may have been centuries ago in Wakanda. With structures being crafted from natural materials like wood, fabric, and precious metals.

This original design belongs to an Ancient Monorail.

This is an Ancient Turret, which looks different from that of its contemporary brother.

When it comes to the Wakandan landscape, the team claims that there is more verticality to everything than anything else they've built for the game before. In fact, players will have to watch their steps as there are deadly drop-offs and bottomless pits waiting to fall victim to.

But if players are careful enough, they'll be able to find strong boxes and treasures hidden both above and below the play path.

One of the deadly drop-offs waiting to take one of the Avenger's respawnable lives is seen in one image.

Also included is an example of one of the many caves scattered around the jungle, many of them housing ancient Wakandan paintings.

Square Enix hopes that fans are thrilled by all the comic references sprinkled throughout, which can be found throughout the missions, the landscape itself, and familiar locations that fans will move through.

The team wanted Wakanda to feel like a contiguous space, showcasing sight-lines across the various parts of the country—something that is different from the other biomes currently present in the game. An example that is cited is how one mission takes place on the crater rim looking towards the Golden City in the vista, and the next scene takes place within the Golden City itself.

The team teased that Part II will be out in the near future, where they'll show fans more of the outpost that players will spend lots of their time in.

At this point, it's hard to take Square Enix at their word.

There are some gameplay additions and changes that the developers have been promising since launch such as Cloning Lab, one of the many promised end game modes. Yes, they finally released MCU skins. But they seem to think that gives that a pass on the previously terrible recycled skins—or their atrocious price point and only being able to acquire them by paying a sizable chunk of money.

They certainly have been walking up War for Wakanda, so hopefully it lives up to the weight that is currently resting on its shoulders. The success of this expansion, and Black Panther's addition to the game, may be good enough to inject some much-needed life into game.

If it doesn't, it's safe to say Square Enix is running out of second chances; their console exclusive Spider-Man character may not do the trick either. But look at something like the now successful in No Man's Sky—anything can happen.