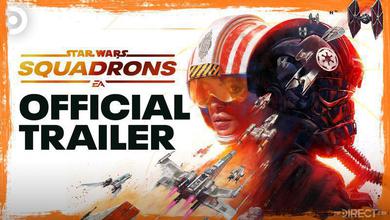 From Sony's reveal of the PlayStation 5 to the upcoming EA Play Live event, the world of gaming has received a ton of good news lately. The same has been true for hardcore Star Wars gamers as they were treated to a brand new game set in the galaxy far, far away. Last week, Electronic Arts (EA) officially announced Star Wars: Squadrons.

Originally titled as Star Wars: Project Maverick, Squadrons was a project that has long been teased ever since it got leaked last March, while also experiencing a series of rumors and announcement delays along the way. After the official announcement from EA, the video game company gradually released new teasers about the game, which includes a new teaser poster and a gameplay reveal (by the end of the week). And now, the marketing campaign for the much-anticipated game is now in full swing as the reveal trailer has been officially released.

The official trailer for Star Wars: Squadrons has been released. It's also been revealed that the game will be released on October 2nd across all three major digital stores which includes Steam, Origin and Epic Games Store with a price of $39.99.

The trailer opens up with a chase scene between a Rebel pilot aboard an X-Wing and an ominous Empire TIE fighter pilot, perfectly capturing the intense feeling that gamers will feel when playing. The reveal also showcased aerial combat action, which is reminiscent of the space battles in the famous space opera franchise. On top of that, the iconic Star Wars score managed to hype up the overall feel of the trailer.

Along with the trailer, EA also provided a gameplay overview for Squadrons which included a number of teases for the game. While the trailer showed fans a glimpse of the planning stages of each squadron, EA confirmed that the players will get the chance to "plan every skirmish" with your squad in the briefing room, which maximizes the "mainly multiplayer" campaign of the game.

Players will also get a chance to control "different starfighter classes from both the New Republic and Imperial fleets" which includes a wide array of ships from the A-wing to the TIE Reaper. While it has been confirmed that it is set after the Battle of Endor, there is a good chance that more era-appropriate ships will be unlocked as the game progresses, effectively providing fans an opportunity to pilot a number of ships in the battle of aerial space supremacy.

After the success of both Battlefront II and Jedi: Fallen Order, Squadrons is looking to be a promising follow up for EA. While the graphics will look to elevate the action and the feel from the original aerial-based Rogue Squadrons game from 1998, the trailer showed that things are looking bright for Squadrons to serve as a worthy successor.