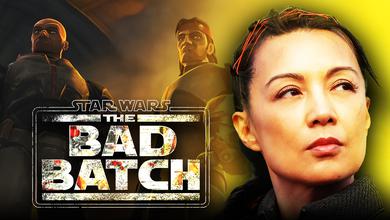 One of the most anticipated characters to appear in Star Wars: The Bad Batch is Fennec Shand, the female bounty hunter played by Ming-Na Wen in both seasons of The Mandalorian.

Promotion for Lucasfilm's newest series confirmed Fennec Shand would appear, even though there's about a thirty-year gap between the events of this series and that of The Mandalorian.

The first three episodes of The Bad Batch mainly focused on the members of Clone Force 99 and their new member Omega.

But in Episode 4 titled "Cornered," Fennec Shand finally made her animated debut where she tried and failed to capture Omega for a mysterious employer.

But just who or what hired Shand? Who is she working for? Who wants Omega and why? Here are a few possibilities.

The synergy is strong with this one.

In Season 1 of The Mandalorian, Din Djarin/Mando claimed that Fennec Shand's reputation came from killing all the top crime syndicates, including the Hutts.

Then in the post-credits scene of The Mandalorian's Season 2 finale, Shand and Boba Fett returned to Tatooine, killed Bib Fortuna, and seemingly assumed power of Jabba's Palace last seen in Return of the Jedi.

So if Shand worked for Jabba in the early days of the Empire, it would establish a history between her and the gangster's palace, perhaps laying a foundation for her role in The Book of Boba Fett.

It would also continue Lucasfilm's tradition of using one Star Wars story to provide context for another.

At the end of The Bad Batch's third episode "Replacements," Kaminoans Nale Se and Lama Su discuss their need to make sure their clones remain essential in light of Admiral Rampart's effort to recruit conscripted soldiers.

They talk of Nale Se's experiment to create a superior clone and how the clones required won't return willingly. But then Lamu Su says something that proves his intent as well as motive, "They are Kaminoan property, and we only need one."

The Kaminoans certainly aren't above working with bounty hunters. After all, the genetic material used for the clones came from Jango Fett — a bounty hunter.

At this point in the series, the Kaminoans believe that the Empire is unaware of their experiments and possibly Omega.

But very little goes on in the galaxy without Emperor Palpatine knowing about it, and he's always been one step ahead from the beginning.

It's quite possible that he's aware of what Nale Se has been up to and has already made moves to have Tarkin, Rampart, and possibly even Darth Vader, get involved.

Dryden Vos and Maul, the heads of the Crimson Dawn syndicate, may be aware of Omega's importance and hired Shand to get in the game.

In the final season of Star Wars: The Clone Wars, Maul ordered Vos to go into hiding right before Order 66 as he anticipated the fallout of the fall of the Republic.

But now that the early days of the Empire are well underway, perhaps it's time for Crimson Dawn to make a statement?

The Clone Wars showed young Boba establishing himself as a formidable bounty hunter and forming a network of nefarious contacts with his own syndicate the Krayt's Claw.

Seeing how his father Jango hired bounty hunters like Zam Wesell, why wouldn't Boba also hire a bounty hunter like Fennec Shand? And, considering Boba is an unaltered clone, he may have an interest in what the Kaminoans are up to.

Something else to consider is that if Omega is a clone of Jango Fett, then she and Boba are actually siblings! After all, it certainly wouldn't be the first time Star Wars introduced a complicated family tree.

But if Boba hired Shand, it probably would be for the purpose of creating an earlier history between the two that could complement their story in The Book of Boba Fett releasing later this year.

However, since their history seemed limited to the events of The Mandalorian, Boba hiring Shand is perhaps the most unlikely of these options. But yet, it also makes the most sense if Lucasfilm is intent on connecting their ongoing Star Wars stories.

THE TWO MYSTERIES OF THE BAD BATCH

It probably won't be long before Fennec Shand surfaces again in The Bad Batch. Even though her first attempt at capturing Omega failed, she did say that she would succeed in the end.

In the meantime, there are two Star Wars mysteries for fans to speculate about: why Omega is special and just who Fennec Shand is working for.