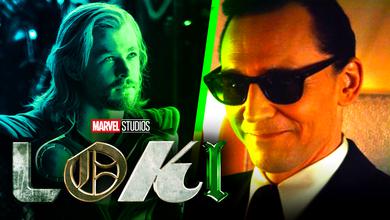 The year was 1971, and a handsome man in shades and a black suit had just boarded a Boeing 747 in Portland, Oregon, bound for Seattle, Washington. The mystery man's ame was D.B. Cooper.

While waiting for the plane to take off, the well-dressed Cooper ordered himself a bourbon and soda, handing the stewardess a note, indicating that he had a bomb, before demanding $200,000 in cash, as well as four parachutes.

As requested by the mysterious hijacker, the flight went ahead and Cooper exchanged the passengers for his ransom upon arrival in Seattle. Cash in hand, he demanded a new course set for Mexico City, keeping only the flight crew on board, a demand that was once again fulfilled.

Somewhere along the course, the smooth criminal did the impossible and jumped from the plane with his parachute and ransom money in hand. And that is where the story ends, as the true identity of D.B. Cooper remains unknown to this day.

This story may sound awfully familiar to many Marvel fans who have just watched the premiere episode of Loki and saw Tom Hiddleston's Asgardian God pull off an extremely similar stunt.

IT'S BEEN LOKI ALL ALONG...

During the premiere episode of Loki, Marvel made a surprising connection to real-world history as Tom Hiddleston's God of Mischief was revealed as the elusive D.B. Cooper within the MCU. But why exactly did an Asgardian need thousands of dollars in cash? This is an interesting question that the episode also addressed.

While discussing the psyche behind the God of Mischief, Mobius displays a time theater projection from Loki's past, taking viewers back to the '70s to show one of his greatest escapes.

Waldron certainly nailed the historical details within this scene as Captain William A. Scott takes the intercom of Northwest Orient Airlines 305 en-route to Seattle, perfectly mirroring the real-life hijacking. Additionally, Loki was shown ordering a bourbon with soda to sip on as the chaos unfolds, much like accounts reveal Cooper did.

After successfully charming the flight attendant with his good looks and suave demeanor, Loki quickly changed the tone of the moment by handing over a note before revealing he had a bomb. As history reveals, it was at this point Cooper demanded four parachutes and a large sum of cash, a request that was met upon the plane landing in Seattle before setting course for Mexico City to make his big escape.

Loki hands the Flight Attendant a note and chuckles

LOKI: You might want to take a look at that note. (WHISPERS) I have a bomb.

Where exactly D.B. Cooper went after acquiring $200,000 in twenty-dollar bills remains a question to this day, as the hijacker jumped from the plane never to be seen again. Well, it's clear Loki went into the plane with a plan in mind as he called on Heimdall to summon the Bifrost in mid-air.

Loki straps on a parachute as the flight attendant hands him a bag of cash.

Loki jumps from the plane and is sucked into the Bifrost in mid-air.

After seeing these events unfold, many viewers, included Agent Mobius, were left wondering why exactly did Loki need to hijack a plane for a pricey ransom. Luckily, that's a question quickly answered by the God of Mischief as he reveals he lost a bet to Thor when he was young, 1007 to be precise. But what exactly was the bet?

MOBIUS: I can't believe you were D.B. Cooper. Come on!

LOKI: I was young, and I lost a bet to Thor.

Naturally, Loki's good looks and charm certainly make him the perfect candidate to be D.B. Cooper. However, there are several key questions left unanswered, such as where an Asgardian gets a bomb?

Throughout the airing of AMC's legendary Mad Men series, which starred Jon Hamm as Don Draper, a common fan theory existed that Draper would eventually be revealed as D.B. Cooper. Across the seven-season run, the writers dropped a multitude of hints towards the potential hijacking, on top of Hamm bearing an obvious resemblance to what is known about Cooper's appearance.

Interestingly, Mad Men happens to be one of Loki writer Michael Waldron's favorite TV series, and it seems the reveal of the God of Mischief as the MCU's D.B. Cooper was intended as a clever reference to the fan theories.

In an interview with Polygon, Waldron addressed his desire to “answer once and for all who is DB Cooper,” and “if it wasn’t Don Draper, it was going to be Loki”:

“It’s just a great piece of folklore. But I wanted to answer once and for all who is DB Cooper. And if it wasn’t Don Draper, it was going to be Loki.”

Additionally, director Kate Herron commented on the decision to include the “new memory from Loki” in amongst the series of clips from Loki's past MCU appearances. While most of the clips simply appear on the time theater projector, the scene is the only one to take over the full screen, something the director explained was “the right move for [her] stylistically”:

“That’s a new memory from Loki, we hadn’t seen that before, so I thought, if we’re ever going to go full screen, we should go into a big cinematic moment. And it’s so fun. So it felt like the right move for me stylistically to do that.”

Sadly when asked about what exactly Loki's bet was with his God of Thunder brother that led to him committing the infamous crime, Waldron joked that it is “maybe a story for another day.”

The plane hijacking scene within the Loki premiere is certainly an interesting one, and it serves as an excellent way to break up a dialogue-heavy episode with some much-needed action.

Given this particular projection takes viewers around fifty years in Loki's past, it seems to paint a picture of a much more youthful and joyfully spirited person. While he justifies the crime to Mobius as the result of a youthful bet, the Asgardian was far from young in the grand scheme of his 1048-year life.

The idea of Thor making a bet with Loki that would lead to such a significant crime on Midgard certainly suggests the two have done a lot of growing up since the 1970s. It's exceptionally hard to imagine the God of Thunder doing anything like that today, but perhaps Loki simply took a dare too far in accidentally making crime history.

Many hardcore fans of the Asgardian duo will be eager to learn what bet Loki could've lost to Thor that could lead to him asking for thousands of dollars in cash. While Waldron describes it as a “story for another day,” this will likely join the infamous Budapest mystery in the list of Marvel questions fans will never get an answer to.

The premiere episode of Loki is streaming now, exclusively on Disney+.