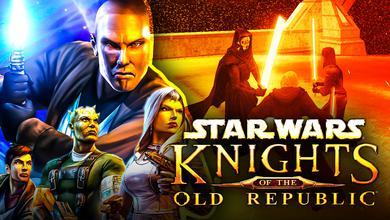 The present day is clearly one of the more exciting times to be a Star Wars fan. A steady stream of new interconnected TV content is on the way, Disney has announced brand-new movies coming in the next few years, and the future looks bright for the gaming side of the franchise as well.

After years of a Star Wars video game EA monopoly, the IP is going public with the announcement earlier this year for Lucasfilm Games. This change will allow talented developers from anywhere to pitch their ideas for interactive adventures in the galaxy far, far away. Yes, the idea of some new properties like the Ubisoft open-world Star Wars title is a thrilling one, taking fans back to the golden age of Star Wars games is an interesting prospect as well.

One entry gamers have been asking about for years has been a revisiting of the Bioware RPG classic Knights of the Old Republic. Recent reporting has hinted at a remake of the project in development at Aspyr Media. While no details have been officially confirmed, this remake may not be the faithful recreation some fans were hoping for.

NOT YOUR OLD MAN'S OLD REPUBLIC

According to a new rumor from YouTuber MrMattyPlays, Aspyr Media's Knights of the Old Republic remake will move away from classic RPG elements for something more action-based.

In MrMattyPlay's video, he mentions the game will be a "be an action-RPG of sorts," similar to the likes of Mass Effect 2 and 3. He goes on to elaborate that Asyper would be “walking away from that real-time, turn-based combat and doing something more along the lines of action combat.”

A NEW DAWN FOR KNIGHTS OF THE OLD REPUBLIC

It's fun to speculate about rumors such as this, but that's the thing: these are just rumors. While this game's existence seems certain as this point, how it will actually look and play is still up in the air.

One thing is clear though: if this KOTOR remake is taking a more modern action-RPG approach, it will upset a great many Star Wars purists. Longtime supporters of the franchise have not been all that receptive to change, so it is easy to see a world where large swaths of the fandom throw quite the temper tantrum upon this game's reveal.

However, this move might not be a bad thing. Games like Mass Effect evolved from classic-feeling RPGs to that of the more action-oriented variety and were better for it. Who's to say Knights of the Old Republic could not benefit from the same glow-up?

No matter what kind of game it turns out to be Aspyr Media's KOTOR will be sure to make headlines upon its official announcement.