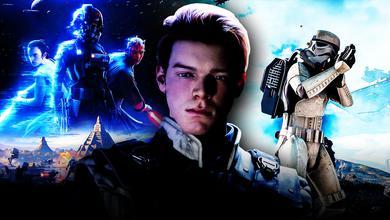 The future of Star Wars in gaming hasn't looked so uncertain since EA's acquisition of the license in May 2013 after Disney's purchase of Lucasfilm. Alongside a multitude of mobile titles, EA has released five main AAA Star Wars releases since 2015 — including: Battlefront, Battlefront 2, Jedi: Fallen Order, and the most recent being the Squadrons title.

Aside from some teases of a sequel to the third person action-adventure title, Jedi: Fallen Order, it remains relatively uncertain what the future of Star Wars games looks like. However, a cryptic tweet from a Lucasfilm executive has suggested that there's a bright future ahead...

Martin responded, saying that he "(hasn't) been this excited for the future of Star Wars gaming in a long time."

I haven't been this excited for the future of Star Wars gaming in a long time. That's about all I can say, unfortunately!

This tease will prove exciting for many Star Wars gamers who are strongly anticipating what's to come as the future remains unclear.

October 2020 most recently saw the release of a space combat title, Squadrons, featuring a multiplayer and single-player campaign. While the title released to largely positive reception, it has failed to maintain a larger player base in the way Battlefront 2 did as it provided post-release updates for new heroes, maps, modes, and entire eras of the saga.

Mass fan outcry has gone viral over recent months, calling for a third installment of the Battlefront series as the second title ended support earlier in the year, leaving behind a slew of highly requested characters — including Ahsoka Tano — who were never released despite consistent cries from fans. Martin's teasing comment may have gaming regaining hope for a Battlefront continuation, an Jedi: Fallen Order sequel, or something else entirely.