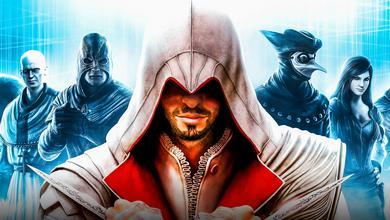 To say the history of video games making the jump to the big screen has yielded less than stellar results would be the understatement of the year. When most think of video game adaptions, images of Jake Gyllenhaal's Prince of Persia or any number of subpar Resident Evil sequels come to mind.

That said, this trend has been making major improvements in the past couple of years. Movies like Sonic the Hedgehog and Detective Pikachu have proven that the gaming-to-movie transition can be made successfully. On the streaming side of things, Netflix has been crushing their video game flicks with adaptions of The Witcher and Castlevania coming out to critical acclaim.

One gaming franchise that has already made the leap to the big screen to mixed results is Assassin's Creed. The Ubisoft-developed stealth-action series is one of the best-selling of all time, featuring an intertwining narrative between a distant future and various time periods throughout history.

After the lack of success with the 2016 AC movie, Netflix and Ubisoft hope to produce something worthy of the games with the live-action Assassin's Creed series that was announced last fall.

According to a report from Variety, Netflix's live-action Assassin's Creed series has hired Die Hard's Jeb Stuart to pen the project.

Netflix has not responded to Variety's request for comment on the news.

WELCOME TO THE CREED

While yes, this is exciting, there is not a ton to glean from news like this. A production as large as Assassin's Creed on Netflix is surely going to be is going to have a multitude of voices in the writers' room, and Jeb Stuart is just the first of many to enter the development side.

Fans can still take something away from this news. As evidenced by Stuart's résumé, the AC faithful can rest assured that this series will be full of pulse-pounding action.

Assassin's Creed will be built upon a less bombastic kind of action that one would find in Stuart's past works like Die Hard, but the base ingredients there are similar. The first Die Hard movie is rooted in incredible tension, something that will work perfectly in the hidden world of Assassins.

As to when audiences will actually see this series is anyone's guess. The fact that Netflix and Ubisoft are only just hiring writers now means the show is still a ways out.