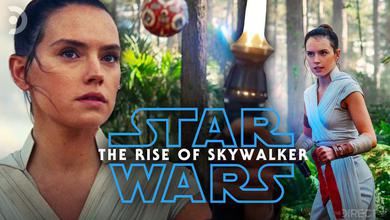 Seeing what the production team had imagined for the film has been fascinating, but it seems the film’s artists aren’t quite done sharing their work.

Phil Szostak, the senior creator and asset specialist at Lucasfilm Ltd., took to Twitter to share concept art by Matthew Savage that showcased the inner workings and components of Rey’s lightsaber saying:

“It wasn’t needed in the end but we did design the inner workings and kyber crystal cage for Rey’s lightsaber. Drawn before we knew what colour the blade would be.” - concept artist Matthew Savage#StarWars #TheRiseofSkywalker https://t.co/09kKYZR8UO pic.twitter.com/on8XCqoqNE

The lightsaber was going to be in more than just one shot at the end. There was going to be a subplot throughout the film showing Rey working on it at her bench, using the Jedi texts as a guide.

While audiences saw Rey use the Skywalker lightsaber throughout The Rise of Skywalker, we only saw her ignite her own in the film's final seen. Getting to see Rey work on her lightsaber would've served to show another part of her Jedi training. While those well versed in Star Wars lore know that building a lightsaber is an essential part of becoming a Jedi, it's rarely seen on screen. It possibly would've added more weight to that final scene and served as a fitting finale to her training.