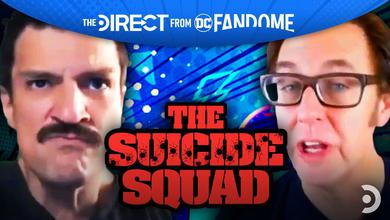 Hot trailers and sizzling TV spots always help, but when a cast has an authentic enthusiasm around their upcoming picture, there is little better. The best advertising departments can craft an elite-tier trailer for a mediocre flick, but one thing that cannot be staged is cast chemistry.

The Suicide Squad is making it their mission to be the talk of DC Fandome. Taking to director James Gunn's Twitter, the sizable cast (including Margot Robbie, Idris Elba, Pete Davidson, and more) expressed their excitement for tomorrow's highly-anticipated event.

#DCFanDome & #TheSuicideSquad : Two great tastes that taste great together. See you there tomorrow at Noon PST for our cast panel, and some cool reveals. And more reveals. And, then, if that isn't enough, more reveals. 😬🔥💥🤯 pic.twitter.com/Ik2AAv6rwz

While there has been no tangible footage or plot points released yet, James Gunn and company are doing a stellar job of building hype for The Suicide Squad.

As seen a couple weeks ago with the cast's birthday wishes to their director, everyone seems to be genuinely happy with this upcoming flick. It may seem trivial, but comradery between stars is integral to an ensemble's success. Clashing egos or leadership issues can tank a motion picture before it ever reaches theatres.

As for tomorrow's panel, what can be expected? Based on the cast's anticipation, it would not be too surprising to see some first-look footage at the new Task Force X. It may be too early for a full-blown trailer, but a brief scene or a compilation teaser seems like the probable route.

Notable absences from this hype video include stars John Cena and Taika Waititi. The former WWE Champion is scheduled to be at DC Fandome, but there has been no confirmation of the New Zealand director making an appearance.

The Suicide Squad panel at DC Fandome is set for 2:55 PM ET tomorrow.