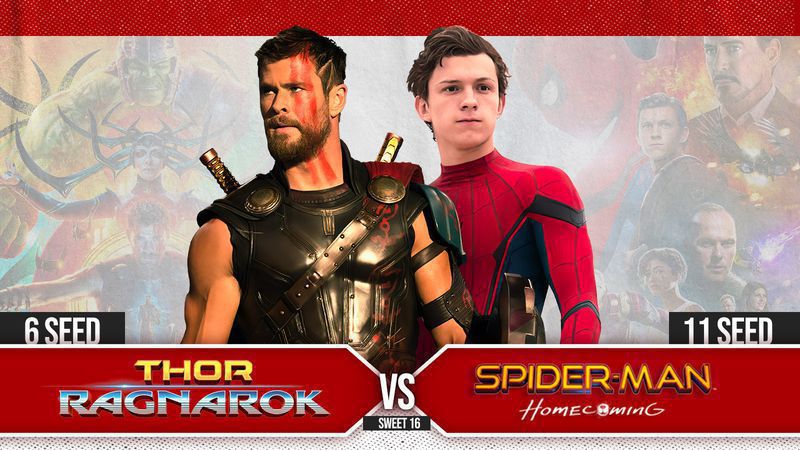 At this point in the MCU Madness Tournament, many fans will start to see some of their favorite movies pitted against one another as movies attempt to advance to the Elite Eight. This battle between Spider-Man: Homecoming and Thor: Ragnarok is an intriguing one, these movies are perceived by MCU fans as being two of the MCU's best solo outings in recent years. The small-scale solo debut of the Webslinger takes on the third (and best) version we get of The God of Thunder. Vote Down Below!

Synopsis: Imprisoned on the other side of the universe, the mighty Thor (Chris Hemsworth) finds himself in a deadly gladiatorial contest that pits him against the Hulk (Mark Ruffalo), his former ally and fellow Avenger. Thor's quest for survival leads him in a race against time to prevent the all-powerful Hela (Cate Blanchett) from destroying his homeworld and the Asgardian civilization.

Pros: Starting with Guardians of the Galaxy and most recently with Captain Marvel, the MCU’s cosmic characters are quickly becoming fan-favorites. Thor Ragnarok gives us a look at one of the staple heroes of the MCU getting that cosmic treatment that was nearly unanimously well-received. The comedy, the action, the music, and the cast all reach elite levels in this movie while still putting together an incredibly compelling story. Many believe that the first two attempts at Thor films fell flat in comparison to other solo franchises. But bringing in Taika Waititi to revamp this series has not only made Thor one of the most beloved characters in the MCU, it also gave us arguably our greatest rendition of The Hulk yet.

Cons: Any of the movies in the top 8 are hard to pick apart because they are so well-loved by the masses. So when assessing the flaws of Thor Raganarok, we have to look back on Thor and Thor: The Dark World. The third Thor film had a huge make-over in the franchise that unlocks the full potential of the title character. But what it leaves is some spotty continuity with the other Son of Odin, Loki. While he is incredibly more likable in this film, he seems to have a huge dynamic shift compared to his last three appearances in the MCU. And while Loki is arguably the most beloved villain in the universe, die-hard fans of the first two movies may miss the emotional emphasis of the villain from Phases 1 and 2.

Synopsis: Thrilled by his experience with the Avengers, young Peter Parker (Tom Holland) returns home to live with his Aunt May. Under the watchful eye of mentor Tony Stark (Robert Downey, Jr.), Parker starts to embrace his newfound identity as Spider-Man. He also tries to return to his normal daily routine -- distracted by thoughts of proving himself to be more than just a friendly neighborhood superhero. Peter must soon put his powers to the test when the evil Vulture (Michael Keaton) emerges to threaten everything that he holds dear.

Pros: After his epic introduction in Captain America: Civil War, Peter Parker gets his own smaller scale adventure with Spider-Man: Homecoming. This movie had a lot going against it prior to its release; five other web-crawler solo films had come before it and the world was starting to feel Spider fatigue. However, this movie does a great job of combining great action, comedy, a dynamic villain and an excellent supporting cast with a vintage, yet fresh, Spider-Man story. Also... Iron Man.

Cons: As mentioned before, this movie had a lot of hurdles to jump being the 6th Spider-Man film in 15 years. Marvel Studios attempts to differentiate from those films with a variety of changes that may seem jarring to the casual moviegoer. There is also a rather large error in timing ("Eight Years Later") at the beginning of the movie that most people try to forget about.